D is For Dumb. D is For Dolan. 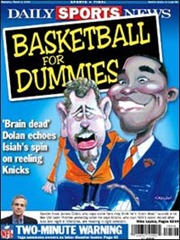 It is often said, “Those who ignore the past, are doomed to repeat it”

While that statement has proven itself to be often true, sometimes there are those select few that are just dumb. Yes, blindly, obliviously, unconditionally D-U-M-B – dumb!

And when it comes to James Dolan, owner of the New York Knicks, he fits the bill of the latter.

I’m sure many of you know where this is going, nonetheless, it needs to be said.

James Dolan is dumb. Sorry, it just had to be put into one sentence.

The idea of bringing back Isiah Thomas after all the carnage and destruction that he amassed in his term as President of Basketball Operations is simply put – unbelievable.

[Sidenote: a quick personal message to you Mr. Dolan, releasing the story to the press on a Friday afternoon, as you did with Thomas’ firing, doesn’t make the story go under-the-radar.]

Nonetheless, the inexplicable affinity that Dolan has for Thomas is so far passed unintelligence, that many now believe that Thomas has some sort of blackmail information on Dolan. And while yours truly was not worked up about the return of Thomas as a “consultant” (I honestly believed he still had Dolan’s ear), that went out the window when I came across this headline in the New York Daily News:

For those of you who haven’t heard or read some of the latest fall outs that have been reported, here are some lines that are sure to make fellow Knick fans angry:

"’Donnie finds this entire thing distasteful,’" said one NBA source. "’He's had second thoughts about staying but he wants to finish the job.’"

“Dolan's insistence on giving Thomas the ambiguous title of consultant angered Walsh, who for two years has been trying to hire former St. John's All-American Chris Mullin as general manager. Dolan has refused to sign off on hiring Mullin and clearly has designs on giving that position to Thomas…”

“The News reported yesterday that Dolan advised Walsh to hire Thomas as his general manager two weeks ago. When Walsh refused, Dolan decided to make Thomas a consultant, a move that was universally panned by several of Dolan's top executives, according to sources.”

“Besides Walsh and Knicks head coach Mike D'Antoni being against the move, Garden vice chairman Hank Ratner and Garden president Scott O'Neil voiced their displeasure but were overruled by Dolan”

“At Stoudemire's introductory press conference, Dolan instructed Walsh to publicly thank Thomas for his assistance in recruiting Stoudemire. There are conflicting accounts on what role, if any, Thomas had in helping the Knicks land Stoudemire, who had previously played for D'Antoni in Phoenix…In fact, Stoudemire's agent, Happy Walters, said in July that Stoudemire hadn't even spoken to Thomas until Dolan's July 4 bash.”

“Walsh, according to a source, was told he had to have Thomas' name attached to the statement.”

So now the truth comes out. And to be honest, while I’m not terribly surprised, I am very, very, upset. As any Knick fan should be. While Isiah’s “consultant” role is undefined, and yes, he may even have some talents to bring to an organization with his ability to draft, the mere fact that Dolan is going against his entire organization of basketball-knowledged personnel is baffling. Quite honestly, its amazing that he is going against Walsh, who has one of the best minds in the NBA. Heck, look at the job he has done getting us out from a potential (another) decade-long mess created by Isiah Thomas.

But I guess that’s a moot point now.

Jim Dolan doesn’t get it. And as a diehard Knicks fan, I’m afraid he never will. Ever since taking over the Knicks from his father, he has run the organization into the ground.

Then again, I’m not telling you anything you did not know.

[Another Sidenote: Why is the NCAA allowing a Division I collegiate coach the ability to work with an NBA team? Not only that, how could they review it and approve it? What’s stopping Coach K, Coach Self, and others from becoming NBA “consultants? But I digress.”]

I’m not sure what the future holds, or where fellow Knicks fans go from here, but with someone like James Dolan beginning to flex his incompetence, a once new and bright era, is now looking more like a big U-turn.

In 2007, James Dolan earned the DP “Idiot of The Year” Award. With a little under four months to go, barring a major mishap, Dolan looks like he has the 2010 award clearly wrapped up.