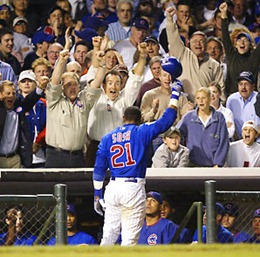 Well apparently Sammy Sosa can now speak English quite fluently. And while part of me means that in a very light gesture, the other half is very serious. [Side note: Sosa spoke in broken English during a congressional testimony in 2005 on performance enhancing drugs] Sosa, who has suddenly broken his silence, and in a major way, is clamoring for his number to be retired by the Chicago Cubs. Here is what Sosa stated:

“They disrespected me. That number should be untouchable because of the things I did for that organization. That right there shows me that they don’t care about me, and they don’t want to have a good relationship with me.”

Now, before I acknowledge my final feelings on Sosa’s statements, I think it is fair to say that Sosa has been one of the most influential and biggest draws in baseball over the last two decades. Whether you want throw in the asterisks and arguments over his PED use (or not, if your still in denial), Sosa, along with McGwire, really helped bring the game of baseball back from it’s crushing 1994 strike. With his then charming smile and “innocent” personality to go along with the sprinting into the outfield, patented jump after the homerun swing, and the double chest-tap kiss to the sky after touching home plate, Sosa had become one of the faces of Major League Baseball.

However, after 609 homeruns, Sosa is now an afterthought. In all actuality, he is a blemish. A mere reminder of what was wrong with the game. And while other steroid users such as McGwire and Bonds are ceremoniously jeered across the country, both still have a place to call home respectively in St. Louis and San Francisco. Places where both are revered. And in the case with Bonds, an organization and city he one day will have his number retired as well.

However, in the case of Sosa, this will never happen. Primarily, he left the team on terrible terms. While Sosa is one of the best players to ever put on a Chicago Cubs uniform (Seriously, look at the numbers), the truth is in the very fact that #21 is not just unretired, but is in actual use. That alone states that the Cubs want nothing to do with Sammy Sosa – history or legacy.

A great example is that of the New York Yankees who have yet to issue #51 formerly worn by Bernie Williams, which will be retired someday, and #21 for Paul O’neill, which Yankee fans will force into retirement.

Tyler Colvin is currently #21 for the Chicago Cubs. And before him it was Jason Marquis.

Regardless of truth and substance, it is very tacky for a player to beg and gravel to be immortalized by having his number retired. However, in some way weird working of karma, what’s due to you, or what-goes-around-comes-around, this might be baseball’s way of sticking it back to Sosa. In a time of need when fans and the game wanted answers, Sosa suddenly forgot how to speak English. Now, in a time of need of acknowledgement, the rest of the world suddenly forgot how to speak Sosa’s language – including the Chicago Cubs.