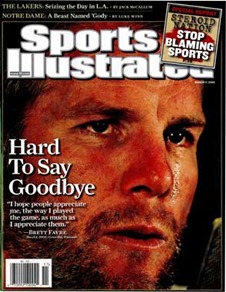 Brett Favre and his antics, which seem to pop up this time of the year, has become the norm. In fact, we should just call it “Favre Season.” You know, the time of the year when training camp begins and Favre feels the need to have everyone talk about him (especially ESPN). The time of the year when even LeBron James and his “Decision” show signs of humility. OK, well maybe not that bad, but LeBron must be impressed.

Nonetheless, in all seriousness, there are “reports” and “sources” that have Brett Favre finally retiring this year – for good. And while “sources” and “reports” have become about as credible as reporting from you and I due to the social network age we now live in, I hope that these reports are either completely true, or completely false.


Because the fact of the matter is Brett Favre cannot afford to have another case of lying in limbo.

While the first un-retirement was remarkable, and the second one was that much better, Favre’s legacy takes a hit each year with this drama. And although he is still loved by football enthusiasts, there is now a generation out there that doesn’t know the Super Bowl winning, multi-time MVP, Green Bay Packer that he was, but the non-committal, ego-driven, scruffy, 40 plus year old, that has become more of a gimmick because he’s “the good old country guy that can still hang with the young guys”.

I understand it’s hard for Brett Favre. Coming to grips with the end of something you do so well, and for so long, can be tough. Each year, it must become harder for him to say goodbye.