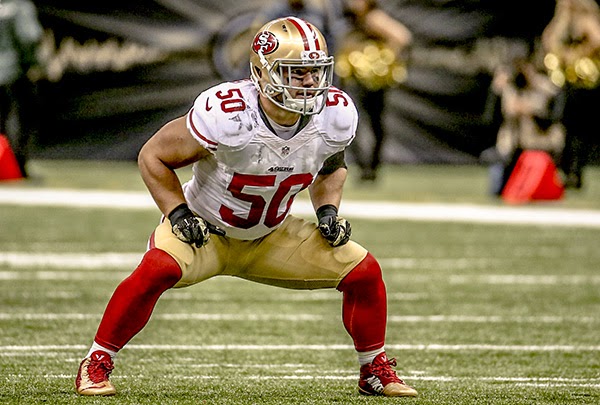 I've always said that the NFL is indestructible because quite frankly, it is. It is the largest and most prominent entertainment company in our nation, and continues to expound upon it's already massive and ridiculous revenue stream. And that statement rings true even after the NFL went through the public ringer on various cases of domestic abuse and other forms of league-wide player discipline.

So after today, when San Francisco 49ers linebacker, Chris Borland, a budding superstar in the league, decided to hang it up at the young age of twenty-four, I was thoroughly surprised. And then when he stated that super real statement, "...health is more important than a career in football", I knew things were about to get heavy really quickly on this topic.

Of course, this riled up the very hot-button debate over the past few years regarding the overall long-term health of professional football players. Not to mention the effects they live with AFTER playing. In today's world of discussion and instant rebuttals, sports talking heads, and over-rationalization, we all knew what was to come.

What an idiot? He gave up a ton of money for what? A chance of something happening?

What a quitter! Thanks for allowing the 49ers to waste a pick on you.

Players are so soft now. The league has been around for over 100 years. NOW we want to talk about these "effects"?

Good for Borland! It's about time someone made a decision for health and not for the money. I applaud his decision.

Worst-run league ever. Lucky for the NFL this nation holds football as it's only agreeable religion.

Those were some of the statements and blurbs I read in comment sections. Some are in support of Borland, others simply coming to the defense of the shield.

Quite honestly, I fall on the former side of the argument as I commend Chris Borland for his decision. I'm sure (actually VERY sure) walking away from money that is life changing and also giving up your lifelong dream isn't an easy decision to make all in one huge swoop. And to be fair, that decision doesn't belong to the NFL, or the 49ers, or even the fans. How dare some even have thoughts along those lines? Get over yourselves. 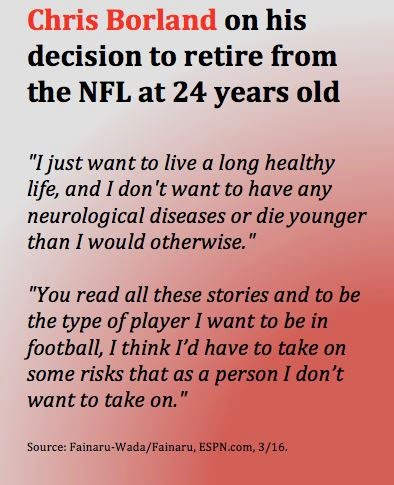 In my opinion, this is indeed a blow for the NFL. How big? We'll soon find out. Obviously, it won't bring down the demand for the product, as we know the shield always stands strong and tall - indestructible!!! However, looking at the issue in which Major League Baseball has dealt with over the past fifteen years in losing our nation's best athletes to other  sports, primarily football and basketball, you have to wonder if all of these reports, studies, real-life examples, parents forbidding their children in playing, and now a slew of young promising stars giving up the game at young ages will swing this natural recruitment.

Will more young, talented athletes go the way of other sports? Will we see more (rare) multi-sport high school athletes turn down that football scholarship to play basketball, baseball, or others such as wrestling or track. Hey, it still pays for the free education, right? And of course, less long-term risks.

Again, I'm not sure if this is the beginning of such a swing, but it is the beginning of yet another huge issue on the plate of the NFL. Obviously, the shield will not be weakened by this. Nonetheless, with Chris Borland throwing a flag on the long-term health of players in the NFL, and thus giving up plenty of riches to do so, will this strengthen the opportunity and talent pool for other leagues?

Everything sure seems to be heading in that direction.