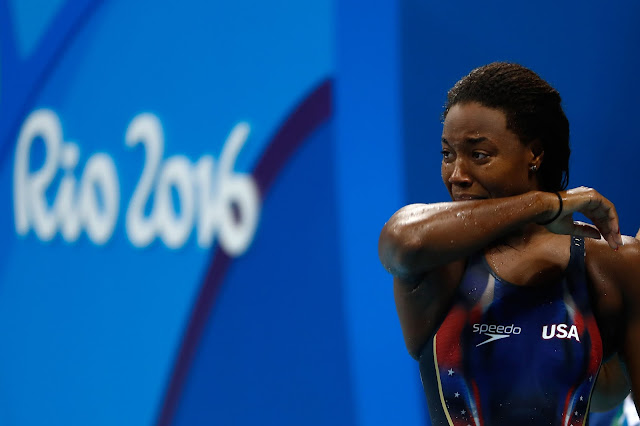 For some reason, the Olympics have taken my attention by storm. The event sort of crept up on me without much anticipation, but has become a mainstay on my nightly television despite some self-sabotaging efforts from NBC. More on that in a bit. Regardless, here are some quick takeaways from the first week of action.

- How freakin' amazing is Michael Phelps? At the point of this writing, Phelps sits at 22 Gold Medals (26 overall). Let me say that again, that's twenty-two freakin' gold medals! One is a major accomplishment for any athlete. Two is extraordinary. Mmmmmm, we can say four is legendary. Phelps has twenty two. Twenty flippin two!

The more you watch Phelps in his races, and the metal focus he embodies that comes before his races (see: #PhelpsFace), the more I realize how lucky we are to witness this era of sheer Olympic dominance. Amazing stuff.

- Staying with swimming, Katie Ledecky is just as amazing, right? It's like she has become this Olympic's version of Missy Franklin. By the way, what's up with Franklin? Yikes.

- I'm going to be honest, I don't know much about Gymnastics. Quite frankly, I always cringe when I hear the commentators criticize small infractions and magnify the intimacies of the sport. To me, it's all amazing. Even more so when my exercise science background is used as a lens for my viewpoint. These athletes are unreal, especially the United States women's team, aka The Final Five, who do are the epitome of hard work and exceptional God-given talent.

Despite their dominance, I am more in awe and appreciation of the diversity of the group. It's a great representation of what should be an example of the potential strength of our country if social justice were not a thorn in our existence and history as a nation.

- Speaking of diversity, kudos to Simone Manuel. She is now the first black swimmer to ever medal in the Olympics for the United States. An absolutely awesome accomplishment. In my view, the biggest and most wide reaching moment of the Olympics yet.

If you know how Jim Crow metastasized in America's pools, you know how significant #SimoneManuel's gold medal is #Rio2016 #blackhistory
— Kevin B. Blackistone (@ProfBlackistone) August 12, 2016

Between the Final Five and Simone Manuel, little girls everywhere, of all types of intersectionalities and backgrounds, especially those of color, have real examples of what is now possible, and undoubtedly, will be inspired.

- Disappointed in the United States women's soccer team. Let's leave it at that.

- Finally, what's with the NBC coverage of the Olympics? The coverage just seems all over the place in terms of presentation. Why would NBC air the fantastic performance of the Final Five at 10:30pm? Wouldn't that be something little girls would love to see? And I understand where I live, and all of that "Go USA" spirit, but can we equally present athletes of other countries?

I don't know. I just feel that in a world of in-demand television and the far lengths networks go in presenting sporting events and leagues - cough*NFL*cough - more can be done to bring us the events, games, and stories involved in the Olympics.