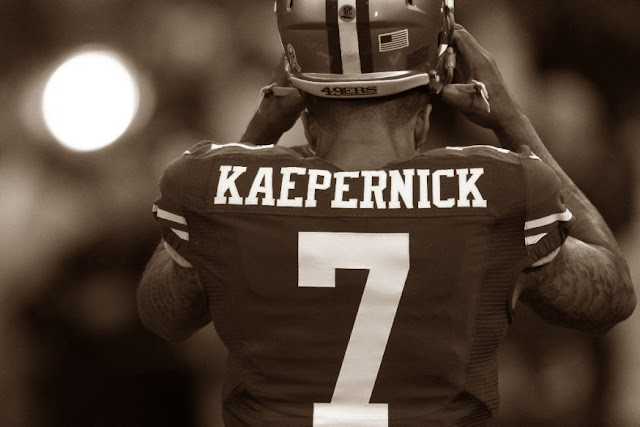 So when did expressing your first amendment right suddenly become un-American?

Look, many are going to flare up in anger on either side of the fence, much the way they already have, in reading this post - if you choose to do so. But the recent Colin Kaepernick situation has me flustered, confused, baffled, and quite frankly, a bit amused.

- Returning to my opening statement, when did taking a neutral position on sitting for the national anthem suddenly become an expression of hate for one's country? Again, I have yet to understand why many are lashing out against Kap for expressing the very right which makes us American in the first amendment?

- I find the "insult to the military" argument to be utterly weak and ridiculous. Why are American's always so hell bent on rating, grading, and declaring the level of someone else's patriotism? We're always looking for an unmarked box to quickly scream, "NOT AMERICAN!". More on that in a bit.


Look, most of the veterans I know will tell you they love this country. They fight to protect the freedoms in which we enjoy, not a song. I've heard it myself, and honestly, just review #veteransforkaepernick on Twitter. The military argument isn't as clear cut as many will attempt to make it seem.

- As Bomani Jones recently stated in an awesome article, those who are stating "they didn't like the way he did it" haven't come up with, you know, a way he should do it. Quite frankly, this should make us feel uncomfortable. This should bring to light issues in this country we refuse to discuss or acknowledge. That's what a protest is.

Kaepernick did just that. In a year which we buried Muhammad Ali, and in a country where we hold the legacy of Jackie Robinson in high regards, it's astonishing to see many opposing his stance and the opportunity to use the platform to make such a stir in society. Then again, this is the same kid of backlash both face in real time. Hindsight is what made heroes out of both.

- I find it hilarious when his profession or the amount of money he makes is brought into the issue. Why does that matter? Aren't we always looking for more people on these platforms to be informed on social issues before taking a stand. And oh yeah? Don't we always cry for them to you know, take a stand! Should the amount of money you make, your education, or any sort of self-identifier disqualify you from tackling social justice issues? Why does his bi-racial being matter? Why does his white adoptive parents matter? Shouldn't we ALL be concerned with oppression and the marginalization of specific people in our...America?

- Going back to my comments above on patriotism, America is so different to so many different people. Unfortunately, white privilege doesn't allow this to sink in for most. I've know this since I was in High School. It was confirmed in my college years. And it is ever more apparent as an adult in dealing with college-aged individuals. As a black male, they way I grew up, live, and think about this country are completely different than others. America has different meanings to minorities in this country than to whites. That's just the way it is. Always has been, and more than likely is at the core of this very discussion.

Truthfully, my America is a complex one. I admit, I struggle some days in what the stars and stripes really mean. Sorry, "'Murica" never applied to me. Ever.

- U.S. history goes well beyond the history books we did our homework to back in high school. For those who love the national anthem so much and use this as your point of emphasis within this situation, I urge you to invest some time into the entire transcript of Francis Scott Key's note. Don't just focus on the first stanza, which stands as our national anthem, but the entire thing. Just in case you can't believe your eyes, yes, the third paragraph does state the following:

No refuge could save the hireling and slave
From the terror of flight, or the gloom of the grave:
And the star-spangled banner in triumph doth wave,
O'er the land of the free and the home of the brave.

-  Also, can we note, that we - WE - asked Colin Kaepernick about his protest. He never once sought public expression on this.

- Finally, closing on some personal opinions, again, how can I hate on Colin Kaepernick? He's exercising one of the most American things in expressing his right to free speech.

However, going further on his message, I applaud him. I really do. I actually find it sad that we're so focused on the act of the protest, rather than the issues causing the protest.

Maybe you think that makes me Un-American. And that's your right, your opinion. But again, there are many who feel the same way which has nothing to do with political parties or loop holes in my patriotism. There is a massive problem with oppression rooted in racism and classism that exists in this country. Always has been. This country is built on this history. This country still carries and exercises demons from this history.

It's why people like myself, born and raised here, still struggle to understand and cope with how to express my love for America. Because it's complicated. So complicated.

Unfortunately, until this is understood, that pound the puffed out chest and belching "'Murica" kind of patriotism is one I'll never ever know or understand. Because truthfully, like Kaepernick, I love this country for what it's intended to stand for at times more than it's current state.

Again, if that makes me UN-American, then in my opinion, there is something really wrong with the many "true" Americans who refuse to fix it. And that's more telling about our respect for Americana than anything else.