Teixeira Hanging Them Up Closes Another Yankee Chapter 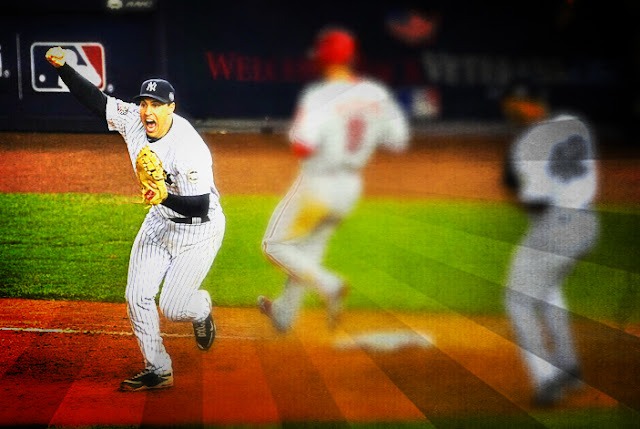 With Mark Teixeira calling it quits, it truly feels like the end of an era. It's an era that Yankee fans haven't really come to grips with yet on what it meant, what it should mean, and ultimately, how we should feel about it but, it's an important era, nonetheless. It produced a championship, and that's the only measuring stick in Yankeeland.

With a championship that stands alone in 2009, a rarity in the existence of the Yankee franchise filled with dynasties and championships in clusters, this chapter was headlined by names like Sabathia, Teixeira, Rodriguez, and Cano which hasn't been digested as of yet. Maybe time will tell, but with Cano slugging in Seattle now, A-Rod a shell of his former self, Sabathia's glory days well behind him, and now, Teixeira calling it quits, that era is coming to a close.


Again, we forget how good the 2009 Yankees were. Tex lead the league in Home Runs and RBIs! Sabathia was among the game's best! Heck, as I always like to rationally explain to spoiled "those" Yankees fans, even AJ Burnett, who pitched and won one of the most important World Series games in my Yankee fandom, was a big part of bringing another commissioner trophy to the Bronx. Again, I urge you to check out the stats of that 2009 team. They really, really were a good team. Sneakily, underrated in perception.

Don't believe me? The 2009 team won 103 games which is better than all of the seasons of the championship teams in the 90's, sans that monster 1998 team, arguably the best team ever assembled.

Again, head over to baseball reference after finishing this one.

But, back to Tex. To answer that burning question...is he a Hall of Famer? Umm, no. But Tex was a fine player, who unfortunately succumbed to injuries which really hurt much of his production in the last few years. He drove me crazy in becoming pull happy when he threw on the pinstripes, and especially so in refusing to take those free hits in the past few years with those damn extreme shifts in front of him.

But really, it was his defense at first base that I loved. For me, he is easily the best fielding first basemen I've seen in my lifetime. He really made you appreciate the value of defense at first base. And if you were paying attention, like for real - watching games and not fantasy numbers, you understand what that defense meant to the perception and ability of Derek Jeter, especially in his latter years.

Mostly though, my respect for Tex comes from the work he has done with Harlen RBI here in the city. He's helped build that program which helps educate so many and provides them the opportunity to play baseball, and of course, the chance to develop better lives for themselves. Easily Teixeira's best work as a Yankee.

It's going to be weird next year. As long as I've been alive, Yankees first basemen have felt like Presidential terms with each having a previous institution's legacy they've had to overcome. Don Mattingly. Tino Martinez. Jason Giambi. Mark Teixeira. We'll see if Greg Bird becomes the next name in line.

Regardless, the Yankees are in transition. From Jeter, Posada, Pettitte, and Rivera, to Sabathia, Teixeira, Rodriguez, and Cano, to what now looks to be a new crop to lead the way soon in Severino, Gregorious, Frazier, Sanchez, Judge, and Betances. We'll see. I hope. I really hope. I'm reeeeeeaaaallllllllllllllllllllly excited for the future.

But before that comes, I'll enjoy Mark Teixeira's last couple of games down the stretch. He was a class act on the field, and an even better human being. And of course, he spurred one of my favorite John Sterling homerun calls in, "Mark sends a Tex message! Ooooooooooh, you're on the Mark, Teixeira!"