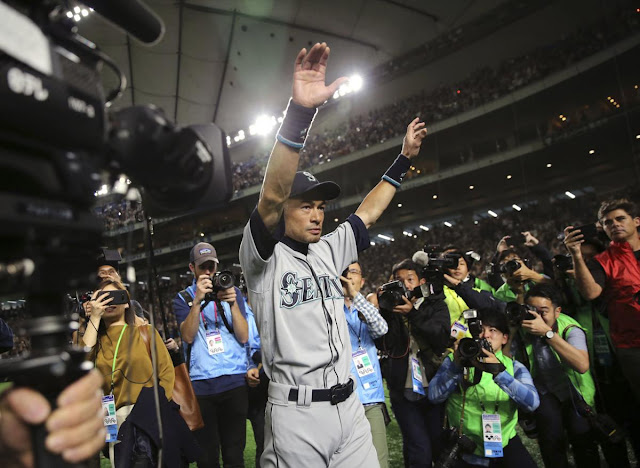 1. NCAA Tournament - March Madness is always fun. And I've honestly watch wayyyy too much of it so far. And tonight's Duke vs. USF game...wow. The whole tournament so far - wow!

2. New Zealand Gun Laws - I'm giving New Zealand another "up" this week as their government moves forward in banning all military assault rifles. Also, kudos to the people of New Zealand. Some were upset with the change that made this guns suddenly illegal, however, they understand and have decided to comply. Imagine, that? Reasonable people? What?

3. Ichiro Retirement - I was glad I was up and in front of a TV to see Ichiro's retirement and to see him run off the field one last time. The guy is so insanely unique, and was an absolute joy to watch over his career. A rare player that didn't need the long ball to make him must-see.

1. Parkland Student Suicides - I really hope this doesn't go unnoticed. Because no one discussed the trauma and fear those who survive feel after these violent episodes and mass shootings within our schools. Two Parkland students have taken their lives this week. There is so much damage even after we stop talking about it. So incredibly sad.

2. Subway Attacker - This dude attacked a 70+ year old lady who was unable to defend herself. People, man. We live in such a sick world.

3. Middle America Flooding - Certain parts of the country are dealing with some big time flooding that have been ruining towns, homes, and communities as rivers and waterways overflow. Such a tough time as rare tornados and weather patterns have been causing the unique disaster in middle America.

1. Mueller Report - Everything about this report is annoying. Really, both political sides are waiting to use whatever the outcome is as political fodder. I personally don't care what it says or doesn't. At this point - over half way through this Presidency - it's very clear what this Presidency is about, and who it represents.