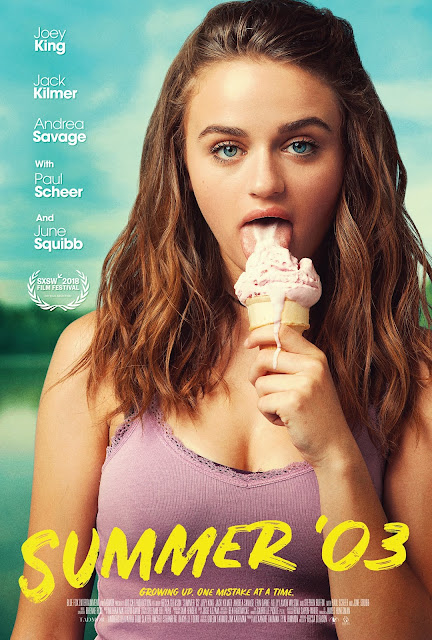 A grandmother's comments while on her deathbed leaves a family reeling during the Summer of 2003.

After Jamie's relationship with Luke goes awry, she goes to March's party where much of her frustration comes to a head.

"All the mistakes that we made turned out to be very good mistakes for us."

I selected Summer 03 while going through the abundance of things on Amazon Prime. As always, I'm a sucker for a good coming-of-age film. However, this one was different. This film definitely was different. Summer 03 feels different, and rightfully so - a coming of age written and told from the perspective of a woman.

This film touches on the usual summer vibes that all adolescents going through, especially as explained in the opening narrative of the film - long days that intertwine with one another for a summer we barely remember. And while that is the case, most of the time there were countless struggles, mistakes, and growing pains that came with them. Summer 03 touches upon this regarding the initiation of sexuality for "Jamie", a sixteen year old girl in Cincinnati.

And while yes, the film - to me at least - often feels a bit over the top, sometimes zany, in whole, the character of Jamie and her constant struggles and mistakes keep you enthralled. In fact, if there is a reason to see this film it is for the work of Joey King in her role as Jamie.

Summer 03 is different. It's interesting. It's out there. However, it's not a bad film, and one that we all somehow can relate to when it came to those summer days leading up to a new school year.

If you're searching through Amazon Prime, definitely give it a try.