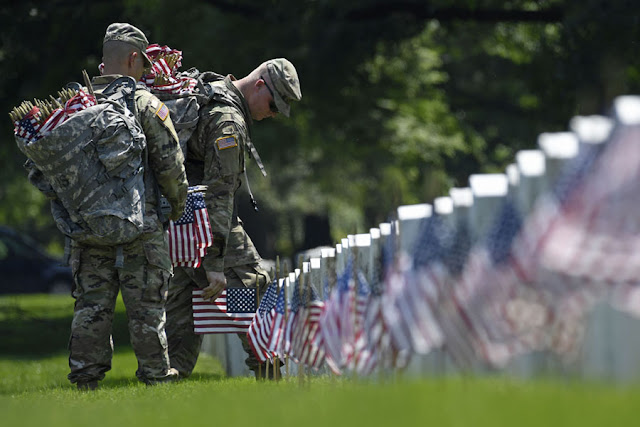 1. Memorial Day Weekend - Sure, it's the unofficial start of summer. It's also a three day weekend. However, let us not forget the many who lost their lives defending and protecting our country from the evil forces that roam the world.

2. Lady Liberty History - The Washington Post had an extremely interesting article discussing the intention of the gift that was the Statue of Liberty from Paris to America. According to this article (and some deep sources), Lady Liberty was to celebrate freed slaves, not immigrants. But like much of our history when it comes to slavery, we've distorted the truth and attempted to silence it.

3. AEW Double or Nothing - The world of pro wrestling got a major shakeup this weekend after the successful debut of All Elite Wrestling. I haven't watched the show yet, but from everything I've read, including the post-show interviews - this company has some awesome things in place for what should make for a VERY must-see Fall season.

1. Ben Carson - Carson has done absolutely nothing with his role as Secretary of Housing and Urban Development. It's easy to pick on his mistake this week in confusing an REO with well...an Oreo, but Carson, much like Betsy DeVos, have been awful appointees that have done nothing for the public goods they lead. Just bloggin...

2. Weinstein Pay Out - Just when you think white-man privilege has limits, we learn that Weinstein will have to pay upwards of $40M, all of which will come from his company (not him). Also, it looks as if somehow, Weinstein will walk away from this unscathed. SMH.

1. Drake - I'm happy for a guy like Drake - I really am. I'm happy for the Raptors and the extremely awesome sports city that is Toronto, Ontario, Canada. However, Drake, my man, can we tone it down. There is a difference in being celebrity fan and becoming downright annoying. You've surpassed that threshold several times this week.