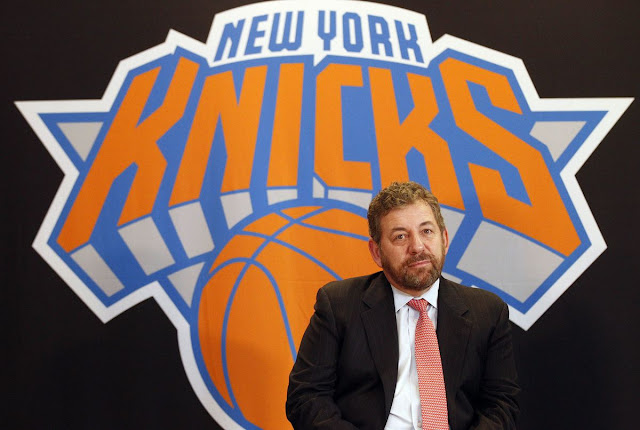 It's been quite the long time since I've jabbed the keyboard regarding the New York Knicks. Maybe I've become absolutely numb to the pain they cause. But tonight feels just right to jump back into this old-favorite of ranting about my beloved New York Knicks.

Quite frankly, a wound has been ripped back open. So let's just jump back into it.

MISGUIDED, OVER DONE, AND PLAYED OUT

Let's start here - with the overall narrative of making fun of the Knicks that is out there. Tonight, the start of NBA Free Agency and the wild madness that it is, is a brash reminder of the difference in the New York Knicks local narrative, and that of the national narrative. There is a vastly different distinction.

Yes, both have their takes on the Knicks ineptitude - and rightfully so. However, throughout this entire process, it always felt like the national media played up the "big free agent summer" ordeal. Sure, Dolan opened his big mouth (more on that in a bit), but even following the Durant industry, if you scour NYC talk radio or simply chatted with your random fan on the Subway or around the way, there has been a significant consensus of Knicks fans with low expectations, who were not interested in Kyrie Irving, and/or split 50/50 on acquiring a post-achilles-rupture KD.

With that said, watching "The Jump" this evening for several hours, considered by myself to be one of ESPN's last reliable and articulate shows for any sport on their network, the jabs at the Knicks were slightly overdramatized and in many ways, misrepresented of the fan base. Sorry, Stephen A. does not represent the Knicks fan base.

But with that said, I get it. Bashing the Knicks makes for good TV, and you know what? The Knicks make it outright easy to do so.

The move is an interesting one. Quite frankly, while I'm annoyed (wait for it...), I am happy for Nets fans and really, for NYC basketball. Basketball seasons around here have been utterly atrocious lately, and as much as I love baseball, it's not fun talking pitcher's and catchers in January.

For me, I've never been a HUGE fan of Kyrie Irving. As a Knicks fan, I've been down the road of the ball hogging star (see: Carmelo Anthony), and I'm just not that in love with his game. Just me.

As for Kevin Durant, regardless of what his post-injury abilities are, I will say this, 70% of Kevin Durant is much better than anything we've had over the past decade. Melo included.

Sooooooooo...if I step away from this situation for a moment, it's rather easy to see that NBA Free Agency really doesn't "begin" when they claim it does. After all, deals and agreements were announced well before the 6PM period began.

However, what really bugs me in this situation is the Knicks well, being the Knicks. Yes it hurts to lose out on free agency. Yes it hurts to be the butt of all the jokes in the sports world. And yes, it continues to hurt to realize that no one is taking the bait being left out every couple of years.

However, why the leak of the "non-offer" to Kevin Durant? Why the "release" to explain to us fans that you are exciting about staying the course by being "upbeat and confident". Because quite frankly, that release just infuriates us all even more! Don't even dare say things like championships! Just DON'T! It's so incredibly insulting. And honestly, it's amazing how unbelievably Knicks it is.

AND THIS WAS 3 HOURS INTO FREE AGENCY!!!

The whole evening was classic Knicks, and further damages the brand that has suffered for the last twenty years. Even under a regime that I believe has been doing a great job, and in many ways continues to do so, it's these little moments of Jim Dolan which springs up and makes Knicks fans like me absolute MAD!

There is a reason Dolan is a Dome Pondering Hall of Famer. The dude ALWAYS gives me something to write about. I truly believe the expectations hit another level when Dolan went on the Michael Kay Show and stated that the Knicks had a strong belief that top free agents will come aboard this summer.

Dolan never learns. Never. And after missing out for the THIRD time this decade on top free agents, the common denominator is very clear - Dolan. One HAS to believe that players aren't keen on playing for the Knicks under his ownership and leadership.

DAMNED IF THEY DO...

Despite my rage toward Jim Dolan and the usual foolishness that is Knicks fandom, there is a uniqueness to this situation that is indeed un-Knick-like. For years, the Knicks have been blasted for signing the player who is on the wrong side of thirty or coming off of an injury. They've also given huge deals to players who haven't shown the ability to stay healthy or really haven't proven their reality to match the potential (see: Kristaps Porzingis).

The Knicks instead have chosen to invest in young players, players with character, and build this thing the slowest way possible. Julius Randle is a young player with trending ability and analytics that places him in some interesting company. Seems like a good fit with our budding roster.


Knicks are taking a public beating, but I've talked to several rival execs tonight who think the Knicks did the right thing. Kyrie wanted to be a Net. No one has any idea how Durant, at 32, will bounce back. Weak free agency class in 2020. Bad optics. Maybe not a bad decision.
— Chris Mannix (@SIChrisMannix) July 1, 2019

Let’s see Kyrie lead a team & what KD looks like when he’s back first. Nets won the press conference. NYK, in the past, has indulged in wishful thinking & been burned. This time they weighed the risk, read the room and pivoted. Way too early to play the same-ol’-Knicks card. https://t.co/QfCSVy0n4K
— Ric Bucher (@RicBucher) June 30, 2019

The bottom line is, the Knicks are taking the stairs instead of the elevator.

And honestly, after seeing this franchise take the wrong elevator for too long, or at times, practically fall off the fire escape, I can't blame them.

Trust the process, they say, right?

WHEN WILL THE PAIN END?

I know they don't care. After all, to Jim Dolan, I'm a little pion Knicks fan who doesn't have the kind of income that would even make a dent in his decision making. Nonetheless, I don't want to hear about any upcoming free agent classes again. I'm done. Seriously, I'm done.

In fact, my son, who is now 1 year old, I'm already inclined to make sure he grows up anything-but-a Knicks fan. I want the best for him. Being a Brooklyn kid, he'll probably choose the Nets.

All in all - this is miserable. This is absolutely miserable.

RJ Barrett - save us.

Someone, anyone - save us.


Whoever has that Knicks voodoo doll, please put it down now. Enough is enough.
— Jemele Hill (@jemelehill) June 30, 2019