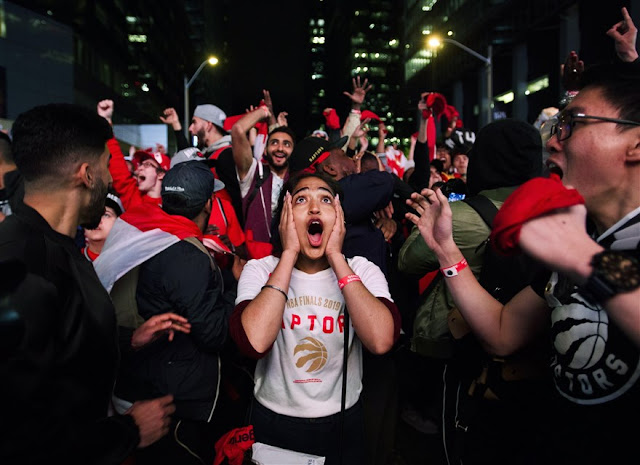 1. Father's Day - I'm a father now, well, have been for a year, but this is my first Father's Day...and it was weird, but rewarding. Happy Father's Day to all the men out there who sacrifice and offer up so much love daily for their sons and daughters everyday.

2. Jon Stewart - Look, celebrities and politics usually illicit an eyeroll. But Jon Stewart's speech before (a rather empty) Congress was one of those rare moments where it felt less about the celebrity getting a few cameras, likes, and trends of their own name, but rather someone who really and genuinely cared. And you know what, good for Stewart! He ended up getting some much needed attention and help for those first responders to 9/11. Shame on our government, by the way.

3. Kawhi Leonard - Everything about the Raptors championship win is so refreshing. The country involved. The fact that the roster is made up of NO LOTTERY PICKS (still blows my mind). But more so, the unassuming superstar (especially when we throw that description around so often and loosely) that is Kawhi Leonard. He's such a joy to watch play. Who said the mid-game play is dead?

1. Phoenix Police - This was tough to watch after it went viral. It's just downright sad, yet, infuriating to see how police responded to a four year old - 4 year old! - who allegedly walked out of a dollar store with a doll. Seriously? Honestly, until the police - fellow officers, especially - begin acknowledging the bad job of their peers, how can communities of marginalized people trust them?

2. Klay and KD - I'm not overly sympathetic to Warriors' fans (and "Fans"), because 3 titles in 5 trips to the NBA Finals is something I can't even imagine for my New York Knicks. However, seeing the likes of Klay Thompson and Kevin Durant fall to the ground with severe injuries, as a basketball fan, that was tough to see. Especially, with that sliver of hope in my heart that KD decides to call MSG home next year. As always - still hoping.

1. St. Louis Blues - I say it every year during the Stanley Cup Finals, I should watch more hockey. Well, I typically don't end up doing that (unless its live), but I love everything about the chase for the cup. Congratulations to the St. Louis Blues on winning it all and of course, saving the rest of the nation from having to watch yet ANOTHER Boston championship.

2. Michigan Baseball Team - I'm a sucker for the College World Series so I have to give props to the Michigan Baseball team. Not only are they insanely fun to watch as a group, but have you also noticed the amount of black baseball players on the squad? Even better is hearing the recruiting stories told - intentional at its core - for each of them. Great job, coach Erik Bakich! Diversity always wins.