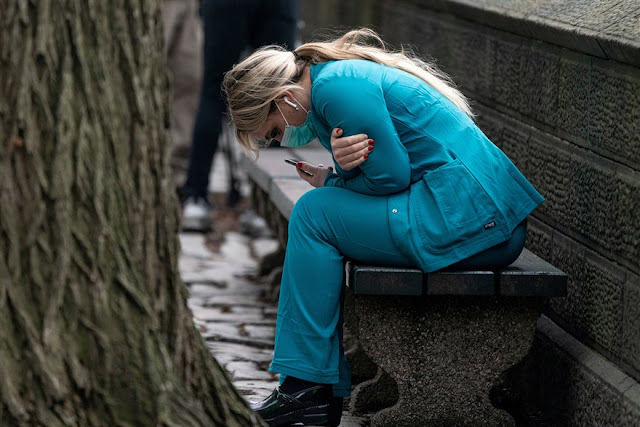 1. Healthcare Professionals - They're all tired. They're all frustrated. They're all willing to risk their lives to continue to save the many affected by this outbreak. I can't say enough about the many healthcare individuals making the sacrifice around the country, especially those right here in New York City.

2. Essential Workers - Most of them on a typical day within our society aren't appreciated enough. But during these times, their jobs' importance - or essential nature - is shining through. They too are risking so much as they play a big role in allowing us to flatten the curve. Be sure to tip your delivery person - it's only right!

3. WWE - It wasn't the greatest Wrestlemania, but you know what? Kudos to WWE for giving us something for two nights to remove ourselves from reality. It fulfilled its purpose - entertainment. It was fun, and it distracted this person from all of the sirens blaring constantly about - a clear sign of the pain this city is in.

1. Unemployment - The effects of the COVID-19 shutdown are now beginning to show as millions and millions of Americans are now unemployed.

2. Mental Health - The mental health of many around the world is very much a concern. Yes, cabin fever is a real thing. But add to this the constant fear or the virus, the worry of the economy, the concern of jobs, and of course, what the future holds. There are a lot of people wondering how they will get by, and yes, a lot of people going through all of this alone. It's so sad.

3. Other Non-Discussed Effects - IT hasn't been brought up yet, but there are already reports of suicide numbers increasing, a rise in domestic abuse, the status of those being trafficked, and the fear among the many immigrants in this country. Life during these Corona Times has domino-effected into some very, very serious concerns among people - besides COVID-19.

Georgia Governor Brian Kemp - This guy, an elected official with access to more resources than the general public, said he was just made aware of the possibility of asymptomatic transmission. Seriously? Like, really?! Who are these people we elect into office?!!!