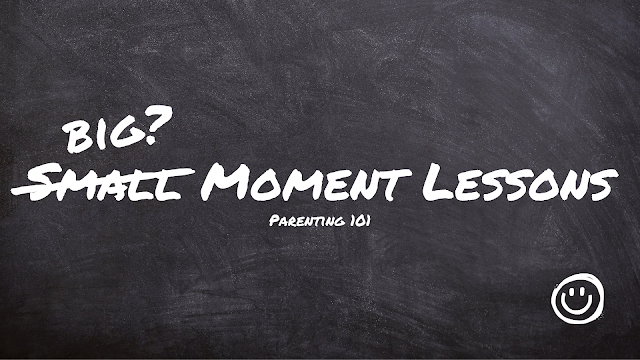 I drove the car home staring at the rearview mirror - or what felt like it - for the majority of the time.
I wanted to make sure that he knew that I was talking to him, and giving him my full attention on this. It was serious - not too serious, sorta serious - but the moment felt like my first test of what will be a series of indefinite small moments - vital, crucial, imperative opportunities. Small enough in the moment, but hopefully strung together enough times to make a difference.
Parenting, right?
Upon picking my son up from school, a complaint was brought to my attention that he was, and I quote, "maybe just a bit too rough with the girls in his class". While I took in the criticism and prepared my mind for addressing the issue with him, the administrator followed it up by stating, "it's not violent or malicious, he's just a boy in a class with all girls. And he's bigger and stronger than all of them."While my son can be that - a boy, a typical toddler boy, that is rambunctious and adventurous - it was the perfect opportunity to explain the importance of yes, laying some groundwork of being less rough with the girls (and ultimately treating everyone well) or for the time being, "being nice to the girls".
I kept telling myself, this is an easy talk. Super easy. You got this! It's just relaying the right thing to do. Say it, he'll get it, and move on. Of course, then the other thoughts creep up once you settle on this being a small moment. I don't want him bullying girls! He needs to treat women correctly! Respect them! Respect them!!!!
On the other hand, I also want my son to be that - a boy. It's not his fault that he's the only boy in his class. And as one of the center directors mentioned to me a few days later when I followed up on the matter, "no one raises the concern when they all pull him roughly in every direction to play with them. The optics are a double-standard".
Of course, there are so many deeper sociological stigmas to unpack there. But I already had my challenge of this upcoming conversation.
Suddenly, it felt like a bigger talk than normal. When did my parenting suddenly shift from the damage-control of him putting himself in danger - don't do that! Put that down! Get down from there! - to suddenly advisement on navigating interpersonal relationships?
Again, simple talk, right?
After strapping him into his car seat, I circled the vehicle and entered the driver's seat. Ok, here goes...
Before beginning, I tried to remember any of my father's discussions with me on this topic. Damn it! Was I even listening? I'm sure he had good stuff. If I wasn't listening for the content and the lesson, I should have at least paid attention for future tests like this one. Ugh!!!!!
It then dawned on me that I'll always have these thoughts going forward - not having my dad to lean on for advice in these moments. Or even the copy-homework-and-make-it-look-different vibe of "hey, what did you say to me?" to work off of.
We pulled out of the school parking lot, and I just let it rip. His disposition and demeanor soaked it all in and there were plenty of "yes daddee" and affirmative "uh huhs". To be honest, as I write this, I have no idea what I said, but it worked. It was clear that he got the message and that he understood the lesson at play.
Parenting, right?
We haven't had any issues since. But it really was the first moment and time during this parenting adventure of mine in which I've felt like there is no manual, or baby book, or suggestion on this. A quick Google won't suffice.
This was genuinely parenting on another level. Those small moments...or are they?
Parenting, right?