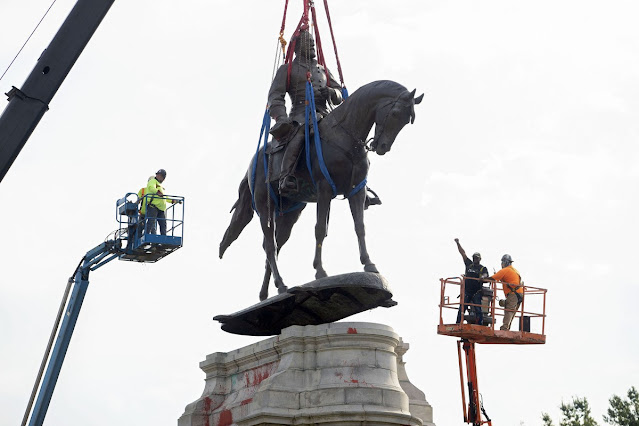 1. September 11th Reflections - The time of the year always brings about a bundle of emotions. This year, the nice round number of 20 brings a milestone of remembrance and reflection. Here is to everyone who shared their thoughts, performed ceremonies, and honored the victims and heroes who should forever deserve it.

2. Robert E. Lee Statue Removal - Well, there was something quite unique and empowering of Robert E. Lee's statue in Virginia be scrawled and spray painted with all sorts of words and meanings that make Confederate supports all types of big mad. But truly, it's long overdue to rip these things down. Starting with the biggest traitor and loser of them all.

1. Unidentified 9/11 Victims - During a week we look back, it's often forgotten the number of families who have yet to receive closure. Over 1100 victims have not been identified or have had their remains found. 20 years later, and in many ways, 9/11 is still not resolved. So incredibly sad.

2. Ex-Prosecutor from Ahmaud Arbery Case - SMH. Everything that has been the Ahmaud Arbery situation is such an example of the American justice system. I just hope there is some slight bit of justice. Unbeleivable.

3. Michael K. Williams - Shout out to a Brooklyn legend and a tremendous actor. Gone too soon.

Tik Tok passes YouTube - Tik Tok has now surpassed YouTube for average watch time in the US and UK. I know I'm getting old when I not only don't care about new social media, but honestly, I don't understand the appeal. But eh, rock on Tik Tokers. Lots of creative minds making their way in the world.

The statue of former Confederate General Robert E. Lee is removed from Monument Avenue in Richmond, Virginia, on September 8, 2021. The statue was lowered to the ground and cut into pieces, then brought to a secure location, where it will be stored until its final place is determined. The statue, one of the largest monuments to the Confederacy in the U.S., was taken down after years of resistance and a long court battle.