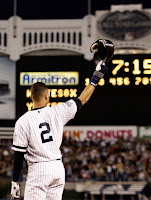 Today, I think many people are in agreement with White Sox manager, Ozzie Guillen, when he said, "please, stop. I'm sick of hearing about this" in regards to the latest steroids controversy. And to be honest, how can you not agree with Guillen? It seems the dark cloud that is the steroid era has made its way over us again, and is raining down its drops of allegations, admissions, speculation, and degredation over the game.

However, the truth of the matter is that this is not over. As more names are leaked, and the confirmation of our suspicions occur, the Pandora's box that was the steroid era is exposed and revealed more clearly. Does it change the past? No. Should we change the past? No. Nonetheless, no matter how much certain writers and members of the national media prefer to add asterisks, labels, and cause a frenzy, there are two distinct (and very polarizing) perceptions that are rising from the constant leakage of these names.

The first situation is the greatness of Derek Sanderson Jeter. For over fifteen years, Jeter has embodied what Major League Baseball seeks in one of the faces of the league. As the names are revealed, ones which were synonymous with power, fame, notoriety and the insane, videogame-like statistics, Jeter, on a pace for 4,000 hits, slowly rises as the single greatest talent during the era. In fact, Jeter is the one player that MLB cannot afford to be connected to performance-enhancing drugs. Any other name will not surprise a fan anymore - except Derek Jeter. And that in it's essence shows how special of a talent Derek Jeter was, and is.

On the other hand...

The second, and most significant situation is the absolute bias towards steroids and baseball. Correct me if I am wrong, but wasn't Calvin Pace of the New York Jets suspended for performance-enhancing drugs recently? Yet, that received little press time, even less scrutiny from reports and sports outlets, and absolutely no criticism based on it it's morality and transgressions of the game. It was a mere blip on the screen. Instead, ESPN's NFL Live focused on how it would affect the Jets defense.

Save the excuse of the focus being a result of baseball's historical records and connection to American culture. Save it. Steroids should not be prioritized based on record at stake or sport. It wasn't a priority for the coverage of Marion Jones. It shouldn't be for Calvin Pace. If we are truly concerned with curbing steroid connection with athletes, our sports, and most importantly, our youth, steroid issues should be dealt with equally.

Yet, football and the NFL continues to get a pass. Amazing.

Two players caught for cheating six years ago when awareness and testing were minimal, or a current player being caught today under strict (and federal) supervision?

It seems we're so concerned with the "steroid era" of the past, that we may not even notice it still exists...or in some cases, we choose not to.