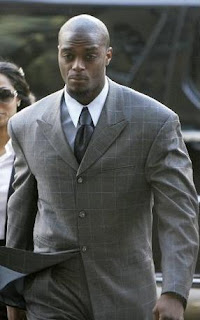 Haven't we heard that before?

It seems so often that many of our celebrities, actors, athletes, and the many undeserved well-known individuals, are privileged under the law. Often they are unknowingly given a pass due to their "status" and "contribution" to society. Obviously, we have experienced this through many scenarios, but when do you we ask ourselves, "When is enough, enough?"

Of course, evident of the opening quote, this revolves around the situation with Plaxico Burress. In the opening day of his trial for possession of an illegal weapon, Burress remoresefully (and expectedly) made his comment in front of a grand jury.

Now it is understood that everyone makes mistakes, and situations happen. However, like many celebrities in the past, Burress made a conscious decision to carry a weapon illegally, and put many innocent people in danger.

However, the defense constantly made for Burress' is his contribution to society and what he means to the city of New York.

Burress' contribution to society is no greater than the kind gentleman I purchase an occasionaly sandwich from at the corner bodega. As for Burress' stature in New York, that only stems from a Super Bowl victory two years ago, a relationship that has since gone sour with the Giants organization, Giants fans, and the wonderful people of this great city. Yet it is still amazing how Burress can be portrayed as a victim.

Not to sound so vindictive, because there are no qualms about individuals receiving second chances, but there is a debt to be paid. Michael Vick, another football player, ruined by poor decisions, felony charges, and prison time, paid his debt to society. 23 months in prison. No excuse. After losing it all, he is on the brink of receiving his second chance, and quite honestly, it'll be great to see a reformed Vick embrace that opportunity.

Nonetheless, Burress is only remorseful because of his current situation. Mayor Bloomberg's mandatory three year sentence for illegal gun possession is at stake in this case. Who is better than Plaxico Burress to make an example of the recently passed law? The Plaxico Burress. Yeah, the guy that won a Superbowl.

It's time to draw the line in the sand. When Dante Stallworth, Cleveland Browns wide receiver, is ordered to a 23 day sentence for vehicular manslaughter (a situation where he admits to being under the influence of alcohol), it was clear society needed to take a stand.

Burress' case is more than just another trial with a superstar athlete, it can possibly be a defining moment in re-introducing the age old standard that "No one is above the law."

In remorse this is said, a standard that needs to be re-introduced.