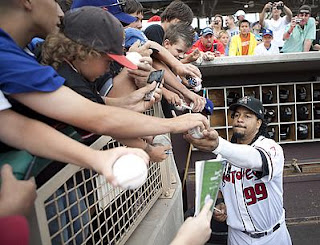 Excuse me if I am beating an old drum titled, "Steroid issue in baseball", but was Manny Ramirez suspended for a banned substance violation?

After this weekend, and the countdown and festivities regarding Ramirez's return, you would have never known. After all, it was understood that cheaters were just that, cheaters. Men, not players, who jeopardized a significant part of our culture, and selected the well-being of themselves over the sanctity of the game. They owe us all something, don't they? Bonds, McGwire, Sosa, Clemens, Palmiero, and Rodriguez. They all owe us. They cheated us, the game, history, and our love.

This is what they did, right? This is what we've been hearing for the past few years. And that is how these men were labeled after being scrutinized.

So why does Ramirez seem more like a swan song comeback coupled with a hero's welcome?

The obvious rebuttal to that question of course is the popularity of Manny Ramirez. Ramirez is one of the most charismatic individuals the game has ever seen. He's no doubt, a unique talent. However, should his charisma overshadow his injustice to the game? The same game which we hold so dearly. The same game for which we vindicate men who did much more for the sport on a national level that Ramirez has.

Why and what merits do we select and choose who gets a second chance, and who is damned on baseball's blacklist forever?

Most blame the media outlets for their pariticpation in this circus act. In fact, the two biggest culprits are FOX and ESPN. After their intensive coverage of the steroid era and the harsh criticism towards Commissioner Selig and his actions toward the plague, these two outlets followed Ramirez's workouts, his minor league rehab assignments, and eventually gave the man his own ticker.

FOX commentator, Tim McCarver made his stand on the Ramirez coverage stating:

It's almost as though Manny Ramirez is being treated as if he'd been on the disabled list for 50 games. ... Why all the adulation for a guy who has served a 50-game suspension when guys like Mark McGwire, Sammy Sosa, Barry Bonds, Rafael Palmeiro and A-Rod served no suspensions, yet they're branded?

And lest we not forget, Ramirez does not "owe" the public the truth about his failed drug test (ala Alex Rodriguez).

Despite it all, yours truly is not naive. I get it. The majority of America can careless about who did what, or who was on what anymore. We have become desensitized to it. Quite frankly, it is understood that the steroid issue in baseball is a beaten horse. In fact, it's all but been declared dead. Nonetheless, if we dare point the finger at one, and claim he doesn't belong, and allow others in who are guilty of the same crime because we like them, we are cheating the game just as much, as the men we shun...and allow.