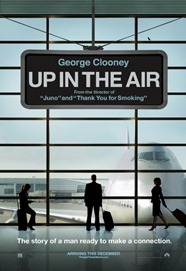 Ryan Bingham leads a life of traveling which is surrounded by his job of career transitioning counseling – firing employees. After his company decides to ground him due to the ideas of a young, bright, but naive girl, he decides to show her the error of her ways. In the process, he realizes the error of his ways, and all the hurt he’s been trying to avoid.

In the middle of an inspirational speech for one of the largest speaking expos of the year, Ryan leaves just after beginning to head to Chicago to see Alex. After she opesn the door, he learns that she is married with children.

Kara Bingham: You’re awfully isolated the way you live.
Ryan Bingham: Isolated? I’m surrounded.
and…
“If you think about it, your favorite memories, the most important moments in your life…were you alone? Life’s better with company.”

Up in the Air is about as good a film as every critic has said it was. It’s a clever film with clever dialogue that includes smart and quip jokes throughout its entirety. Most importantly, its a film that is not cookie cutter in creation, and delivers a message that most films are afraid to realistically tackle – It’s better to have loved and lost, than to have never loved at all.

George Clooney, who played the role of Ryan Bingham, was fantastic. In fact, it has to rank as one of the better movies he has done in his career.

A highly recommended film that is on par with all the acclaims and recommendations it has received. The DP can now be added to that list.