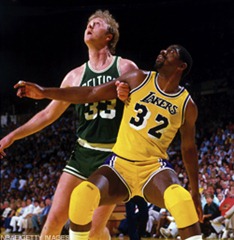 So after the disappointment that was LeBron James and his “decision”, we have the fall out with several NBA legends who have endorsed an almost ringing consensus – where has the spirit of competition gone?

In a previous post (Disappointment: The True Fallout From “The Decision”), yours truly touched base on the letdown of LeBron’s decision. It had nothing to do with the fact that he ditched my beloved New York Knicks, but the very way he has turned himself into an attention seeking personality that is more hung up on “building a brand" and becoming a “global icon” rather than competing. We won’t even go into the way he left his hometown out to dry.

[And lets stop the “he did what was best for him and his family” spiel. It’s amazing how people reiterate common sayings to rectify and justify specific situations. LeBron’s family was well taken care of once he entered the NBA. This decision, as we all could tell by the one hour special, was all about him. Yes, him. But I’ll digress, and return to the regulalry scheduled post.]

The biggest reason for LeBron being a disappointment – is the potential is no longer there. No, not his potential as a player, but his potential as a franchise player, a NBA legend, and yes, even an all-time household name. We all know he can be one of the all-time greatest, but as fans, we looked forward to watching him chase Michael, Larry, and Magic in history.

Because Michael, Larry, and Magic were competitors and winners. Two concepts that used to be intertwined with one another.

But that’s all gone. When LeBron decided to take the easy way out, winning became important. Competitiveness somehow, was left off the wagon.

I’m sure those that disagree with that statement will reiterate that it is all about winning. And you are correct. However, at what expense? A longtime cliché stated, to be the best, you have to beat the best, and to be honest (and to my knowledge) LeBron has never beaten the best. He may win several championships over the next six years, but this will hover over him the way Shaq-less rings haunted Kobe until he shook the 7 foot, 300 pound ghost. Twice.

And now, we have Chris Paul who is complaining (yes, complaining) about “seeking to play with another superstar”. Much like LeBron’s exit from Cleveland, we’ll defy the fact that Paul is still under contract to the Hornets. And yes, the lack of respect for a commitment absolutely drives me crazy about professional sports. Nonetheless, while Paul is very talented, and worthy of have having a quality team built around him, he is looking to “take his talents” elsewhere. All in all, this is just another sign of “its about winning”, as an excuse for a lack of competing.

MJ said it best when he stated:

"There's no way, with hindsight, I would've ever called up Larry, called up Magic and said, 'Hey, look, let's get together and play on one team. But that's ... things are different. I can't say that's a bad thing. It's an opportunity these kids have today. In all honesty, I was trying to beat those guys."

Mike and I are in 100 percent agreement on this. If you're the two-time defending NBA MVP, you don't leave anywhere. They come to you. That's ridiculous. I like LeBron. He's a great player. But I don't think in the history of sports you can find a two-time defending MVP leaving to go play with other people."

And finally, Magic touched on the subject:

“We didn’t think about it ’cause that’s not what we were about. From college, I was trying to figure out how to beat Larry Bird.”

While the summer of 2010 saw three superstars willingly join forces in Miami to win, somehow, someway, they sold their competitive soul to do so.

…And yes, they took the easy way out.