An Alternative View on Vick’s Situation 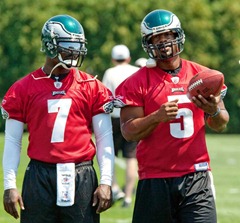 Michael Vick is back in the news…again. And after the second chance, the sympathy, and the grand reclamation project that he has become, Vick finds himself involved with the law for yet another time. And although dog lovers and animal rights activists have yet to forgive him (and probably won’t), Vick’s comeback seemed to have been a mild success until now.

Vick, who is tied to a shooting that occurred outside of a restaurant which held his 30th birthday party festivities, is on the hot seat in regards to the truth of what happened.

So, what did actually happen?

Vick claimed he left 30 minutes before the shootings occurred.

Actual video evidence showed that he did indeed leave 3 minutes before the shootings, and headed in the direction of the shooting.

Regardless of the truth, this does not look good for Vick. And after reviewing this situation, it is hard to believe that Vick would put himself in such a position. It is understood that Vick may not have known what would have happened, or even, what did happen. Yet, he must understand that he is on a short leash. With the law. With the NFL. With society. Especially after a Forbes report shows that he is still the nation’s most hated athlete.

Vick cannot afford to be linked to these type of situations in any remote way, which is why I find this entire thing baffling. He can still have fun, but with caution. He painted himself into this situation, and that is by no on else’s fault but his own.

And yet, after having such a highly critical view on Vick and his lack of judgment, I read Jason Whitlock’s article on foxsports.com which helped me look at Vick’s situation in a different way. The article, describes the response from the black community for Vick, and how it compares to the treatment of Donovan McNabb. It’s a very interesting read which touches base on the scope of how Michael Vick is constantly defended within the black community, while an upstanding and decorated quarterback such as Donovan McNabb has never had such support.

While I rarely agree with Whitlock, I do enjoy his articles, and I find him to be a person that is not afraid to refrain from hot button issues. In this article, he is completely correct. In a sport where men of color have been stereotyped for so long about their leadership and lack of character to hold the quarterback position, Vick has done so much damage to strides made by men such as Warren Moon, Randall Cunningham, and yes, Donovan McNabb.

Whitlock’s assures this idea when he states:

“And all of his defenders/enablers are just as stupid.

What’s always bothered me about Vick is that he’s far more beloved in the black community than McNabb. It’s mind-boggling to me.

No QB in the history of the league has done more damage to the reputation of and the opportunities afforded to black quarterbacks than Michael Vick. And I say that knowing full well that as you read this, JaMarcus Russell is likely somewhere scarfing down hot wings at an all-you-can-eat buffet while wearing $2 million in designer jewelry.

Vick is a nightmare. When he wasn’t setting fire to his groupie conquests as Ron Mexico, he was bunkered in his estate smoking kush and mastering Xbox Madden football. In his spare time, he trained dogs to maim and fight. He hoodwinked Arthur Blank into a $100-million payday and then went to jail.”

It is quite the alternative look on such a sad, and well, stupid situation. And the very ironic part of this is that Philadelphia ran off a future hall of famer, for a thirty year-old ex-convict and reclamation project, who’s reputation is still based on potential than actual accomplishment.

Yup, Whitlock is definitely on to something.

Vick’s judgment might be poor, but, by viewing the grand scheme of the situation - so is ours.