“The Knicks Are Back!” 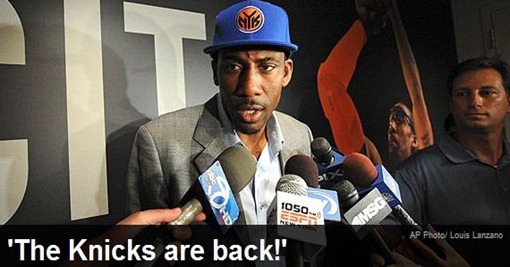 “The Knicks are back!”

A simple statement made by Amar’e Stoudemire, the newest member of my beloved Knicks. Yes, as a die hard Knick fan, I have had my share of rants (Embarrassing – The State of The New York Knickerbockers, A Different Year it is Not, Do Something Right: Isiah’s “One Year” Continues, One More Year of Possible Frustration. A Future of Guaranteed Idiocy) and raves over the past years here at the DP in regards to the love that dominates my winters. Nonetheless, on the midnight that reigned in that magical date of July 1st, 2010, the possibilities seemed worth it for putting up with the last decade.

And now, after several days of following NBA free agency to the point of obsession, listening to Chris Broussard mention everyone going to Chicago 7,289 times, and feeling like once again, due to the possibility of getting shut out that there was a curse on Knick fans, Amar’e Stoudemire is now a New York Knick.

And although he is not the acquisition every Knick fan wants, and although I originally did not warm to the idea of acquiring Stoudemire when it was first rumored, today I am excited – very excited.

And main reasons are because 1) The Knicks have come away with at least someone this summer and 2) we have Amar’e Stoudemire!

Albeit, I will admit, I am worried about his knee. I am worried about his interior defense and rebound production. And yes, I will definitely miss the one shining light in a dark era that was David Lee. However, the one sole reason I have warmed to Stoudemire as a Knick is simple – he wants to be on the big stage. He wants to be here. He wants a piece of this great city of New York.

And although other free agents preach this through their camps, entourage, and “sources”, Stoudemire has taken the initiative and has that New York sense of courage to come here without a partnering “star”, and be the guy.

Whether we land another free agent or not. He is in.

And being the best talent the Knicks have had since Patrick Ewing, in his first statement he states, “The Knicks are back!”

He’s not afraid to make a statement like that. He’s not afraid to back down. He wants the lights. He enjoys the stage. And after viewing a play on Broadway, then catching a Yankee win at the stadium, he well, fits in.

So yes, I am excited for next season. We now have a centerpiece. And as described by Ian O’Connor from ESPNNewYork.com, Stoudemire may be the biggest free agent the Knicks have ever signed for many reasons.

However this isn’t over.

Something tells me there will be more of these posts in the coming weeks. Maybe days.