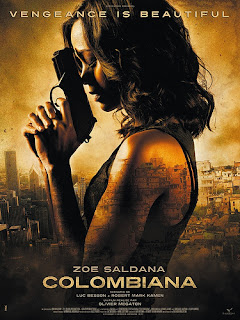 A woman, now a professional assassin, who had her parents killed in front of her as a child seek revenge on the killers.

Opening chase scene where a young Cataleyna escapes her parent's killers and makes her way to America to find her uncle.

"Never forget where you came from"

Columbiana is a movie, especially after viewing the trailer, that will let you down tremendously. While Zoe Saldana was pretty decent and believable as a mysterious assassin, the film which has such a typical, yet interesting, plot of revenging the death of the protagonist's parents, does an extremely poor job of executing the plot throughout the movie.

What should be an easy to produce plot, Columbiana offers lack of character depth, a lack of plot direction, and so many logistical holes in the overall plot to the movie that it leaves you wondering where the film just took you. After viewing the film, you find yourself with numerous questions and searching for answers related to the direct plot rather than any comment or praise for the film. It is simply one of those head scratching productions that just felt rushed.

What about the positives? Well, the film has decent action, especially the opening scene with young Cataleyna running away from her parents killers. The scene is very reminiscent of the opening scene to Casino Royale. And besides the action, of course, there is the always attractive Zoe Saldana.

However, not even Zoe can save this film from mere disappointment and utter mediocrity.

Not a bad film if you don't expect much.