The New (Should Be) Faces of Major League Baseball 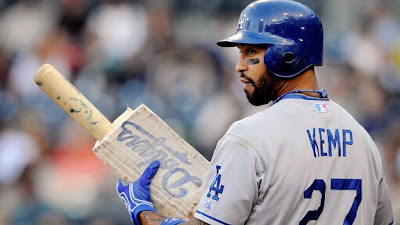 It's no secret here at the DP that I've been looking for baseball's next big ticket for a long time.

My biggest gripe over the years when it comes to the game that I love so much is it's inability to market their stars. I understand the sport is driven by it's teams, however, the game is flooded with great talent that ought to be displayed and made known to even the casual fan.

Unlike the National Football League and National Basketball Association, Major League Baseball is a regional sport. Yet, with a push in marketing, the game and all of it's teams can become of interest nationally, and some of baseball's best talent can indeed become household names. I've always believed baseball's biggest cross-over and mass-appeal talent in my lifetime was Ken Griffey Jr. While Derek Jeter is the face of the game today, Griffey had a certain swag that made him that guy growing up.


His natural athletic ability. The smile. The charisma. The showmanship. The swag. The backwards hat. The sneakers. The video games. He was everywhere. He was the total package.

C'mon, who didn't imitate that infamous high-hands and upper body waggle batting stance along with that sweet long stroke through the zone when they played wiffle or stick ball?

And while Jeter has been that guy for the better part of the past two decades, there is a part of him that never quite filled the void left by Griffey because of his subdued personality. After all, simply take a look at those Ford commercials. I love Jeter, but wow, they are brutal!

The truth is, MLB has missed the boat with so many players since Griffey, with Alex Rodriguez and Albert Pujols topping the list. However, after watching a game on April 28th, 2012 between the Los Angeles Dodgers and Washington Nationals, there are two players that I believe fits the bill going forward - Bryce Harper and Matt Kemp.

And yes, barring injury, off-the-field happenings, or a sudden (and would be shocking) decline in talent, I think I have finally nailed it. These guys are, and should be the next faces of Major League Baseball.

Once dubbed "Baseball's Chosen One" and "Baseball's LeBron" by Sports Illustrated magazine several years ago, Harper has since been on every baseball fan's radar. After having a cup of coffee at each level in the minors, Harper made his debut in the April 28th game in Los Angeles I watched, and he was very impressive. His first hit, a shot off the center field wall was pretty much a love at first sight moment for this fan. Brian Kenney, host of the MLB Network's Clubhouse Confidential, and serious statistic shredder/critic of all baseball player's stated, "I know it's early and the numbers aren't strong or consistent enough to validate any future success, but wow, he definitely passes the eye and gut test. This guy reminds me of Roberto Clemente!"


Yes, it is early. Very early. Yet, you can't deny the "eye test" as Kenney stated. Everything about Harper's first hit defined and was reminiscent of an old-school player. The stirrups. The violent swing. His running gait, and how hard he runs. Even down to the minor addition of throwing his helmet off as he flew into second base.

And then there was this past Sunday night on ESPN's Sunday Night Baseball. The way the kid took an intentional fastball off his lower back from Cole Hamels and took his base without complaint. Went first-to-third on a base hit to left-center like a seasoned pro. Then decided to stick the intentional HBP right back in Hamels face by stealing home on a pick-off play to first base.


Baseball needs Harper. Every other sport and league has its young-phenom, and baseball’s has finally arrived. Harper is “The Natural” come to life sans the tragic ending.

And in the microwave society we live in wanting and needing results immediately, Harper is the clear definition of next generation. He is, well, baseball’s LeBron, and that needs to be exploited, marketed, and utilized.

Harper is must see, and will be for a long, long time.

However, as much as Harper’s youth adds a different marketing dimension for Major League Baseball, the player that should replace Griffey as that “it factor” in baseball, as well as eventually replacing Jeter as the face of the game ought to be Matt Kemp.

Kemp, is the best all-around player in baseball, period.

He has the look, the talent, and even the now missing Griffey-like swag to carry the game.

Kemp has power and speed, the very popular phrase of “entering beast mode”, plays in the large market of Los Angeles, and for one of the game’s most historic franchises in the Dodgers. Total Package.

However, what makes Kemp’s marketability so vital to MLB in my opinion, is that he’s black.

It is no secret that participation by black athletes in baseball has decreased to alarming percentages over the past decade. For as many reasons that can be listed for the lack of black and urban youth in the game of baseball - economic, cultural, generational - a major reason is the lack of black faces in the game. It is a very complex catch-22 the game has found it self in. Yet, a problem that must be solved very soon. The game does not have a face that gives hope to young boys the way a now President Barack Obama can offer belief and legitimacy to dreams of becoming President of the United States.

Who is that guy in baseball? Who is the guy a young black child can look at and identify with, and yearn to want to be like?

Both Curtis Granderson and ESPN columnist, Rob Parker have touched on this issue.

Right now, there is of course, only Jeter.

In the past, I've even made predictions and picks of guys that can carry the sport and can fill this void to improve these low percentages (Chance and Risk: The Future Of The African-American Baseball Player). And for the most part, my predictions have come up empty. C.C. Sabathia has been the only one on that list that I've seen make a difference with many kids of all ages, races, and backgrounds now pitching with a tilted hat and claiming the big Yankee ace as their favorite player.

I truly believe Kemp is the guy to take that kind of grass roots response to the next level.

In a world where the NFL is king, and instant success and on-field diversity is key in the future health of each respective sport, MLB needs to take the necessary steps to ensure it's future through engaging the next generation and re-connecting a now departing sector and ingredient of the American melting pot.

Having a man of color in such a position, with Kemp's skill talents, and his off-the-field appeal can be a huge caveat for the game. And Harper is already must-see appeal. A young gifted, once-in-a-lifetime talent should always be pushed to the moon, and is essential in debunking myths with some youth that baseball is an older generation's game.

The time for the future is now. And it is time for baseball to begin investing in the future with the new faces of baseball - Harper and Kemp.