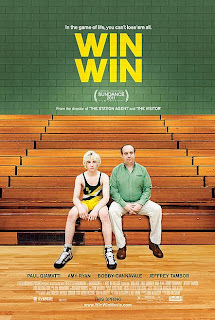 A struggling lawyer and High School wrestling coach's decision to double-cross a client for some additional needed income comes back to change his life when the grandson of the client comes into his life.

After finally getting his chance to wrestle, the nerdy Stemler steps on to the mat for his first match. His opponent turns around wearing a black face mask and Stemler quickly runs back to the bench afraid and yelling "I'm not wrestling Darth Vader"

When you look at the cover of Win Win, it seems like a cheesy, low-budget film that may give you some good laughs. And when you notice that Paul Giamatti, a heck of an actor, and highly underrated, is the lead role, you figure that it might actually be decent. Then you take a peek at the theatrical trailer and you realize that the film seems interesting and could be good. However, after viewing Win Win, you will walk away amazed at the film.

Win Win is a very, very good film that not only boasts an interesting plot with many moral conflicts of doing wrong things for the right reasons and sometimes doing what's right no matter what, but also is a film that delivers quality and natural comedy. Nothing ever feels forced like we so often see these days.

However, the strongest point of Win Win is the amazing development of all the characters. The film has such an innate way of presenting all of the characters in a way with the right scenes, dialogue and insight to each, that you truly have a grasp on them all and what they bring to the plot. Personally, the character of "Terry Delfino" played by Bobby Cannavale is by far my favorite.

And speaking of talent, Win Win is loaded. The always good Paul Giamatti in the lead role of Mike Flaherty. Amy Ryan, who followed up a strong performance in Green Zone with her role as Jackie Flaherty. As mentioned, Cannavale as Terry, and yes, even Burt Young, of "Paulie" fame from the Rocky series, is great as Leo.

All in all, a highly recommended movie that is so entertaining, you will never realize the 106 minute run time.