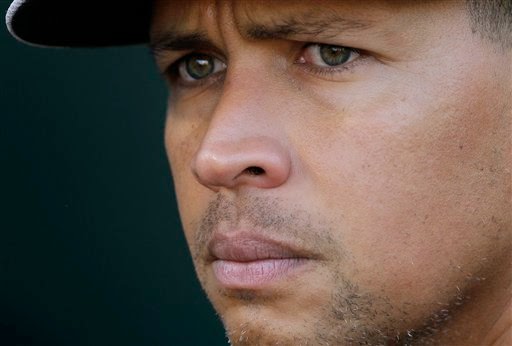 I have to say, it wasn't the same without good ol' Alex Rodriguez in the fold of things. Sure, it worked out that A-Rod had to take his suspension while Derek Jeter got his sendoff from the game without any controversial distractions, but that is all over with. For some, the Yankees weren't looking like the Yankees heading into 2015 without the stars and stories that usually surrounds them.

But ahhhhh, my man, A-Rod, back to save the day and to give us all what he provides best - controversy. It's no secret I consider Rodriguez to be the most interesting and fascinating athlete ever in my lifetime. There is a reason the man is in the DP Page of Fame. Quite honestly, the only fame-anything he may ever be a part of.

So what's the deal with this apology?


A-Rod's hand written apology really doesn't move the needle for me because quite frankly, we've been here before with him. He's pretty much apologized before for the same thing - PEDs. While I hope it is the last, who knows? After all, this is Alex Rodriguez.

Truthfully, the only thing that I received from his letter was that he has pretty decent hand-writing.

I will say that releasing the letter in text, the new "in" thing to do it seems for athletes since LeBron's letter announcing his return to Cleveland, was indeed smart on Rodriguez's side. He's never been a smooth and suave public speaker, therefore a public presser would simply open up a can of worms. Sure the Yankees wanted him to go this route to simply clear the air, but there is a lot that is being drummed up by the media from this situation.

What exactly do they want to hear him say? Sorry? Do they want him to explain why he did it? C'mon! Whatever the question is, we know the answer at this point. We've been down this road, and I honestly do not see what would be resolved from a presser.

The uncut truth is this, for A-Rod again, the vicious cycle turns and it comes down to can he play? After two years of being away from the game, now clean, probably for the first time in his career, and nearing the athletic-career graveyard of the age of forty, can he do enough to at least change everyone's perception of him, his career, and his legacy? That's the entire intrigue of this story and it's quite tough to do. Downright impossible. This is why we're hooked.

We also bear witness to the humanizing piece in ESPN magazine where A-Rod discusses past mistakes, his missing father, his current pursuit of education, and his children. Great piece which does exactly what A-Rod needed, to be humanized a bit. Truthfully, I still question the timing of this story's release.

All in all, even after this latest chapter of Alex Rodriguez adding to the fascination of his entire life and career, I still long for the day when that epiphany hits - boom! - and he has that moment of clarity realizing just exactly what he did, and the opportunities he threw away.

Save the apology letters. Keep the emotional and humanizing pieces of rhetoric. Honestly, in my opinion, it will take something drastic to change the outlook and perception, if that's what he's really searching for in these final days.

You want drastic? How about A-Rod openly declines the $6M Home Run bonuses in his contract?

Yeah, I know, I don't think he would do it either.

Again, the only thing I learned from the apology letter, is that A-Rod has nice handwriting.

As for being sorry, yeah, I still don't believe it.