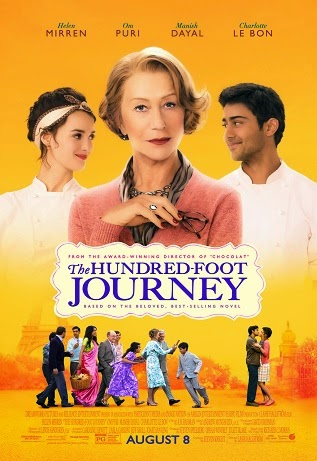 An Indian family settles in France where they open up a restaurant across the street from a well-known and upper-class restaurant. What began as a bitter feud spurred the realization of a dream for all included.

After finding out that her star chef was part of a group that vandalized and later set fire to the Indian family's restaurant across the street, Madame Mallory calls in all of her cooks and fires him in front of everyone.

"Maybe the breaks break for a reason"

The Hundred-Foot Journey is quite the feel-good movie. It has everything you would want in such a film from the rise of struggling immigrants, the rivaling neighbors turned lovers, the realization of a star who then returns home, and of course, the typical love story. You cannot walk away from this film without having a pick-me-up.

As for the rest of the film, it's a good plot, and solid movie that does exactly it's purpose of what we just described. The emphasis and passion for food was done in a very artistic one in tying it to our cultures, upbringing, memories, and overall expression.

My absolute favorite part of this movie is the very moral that our biggest breaks can come from very weird and unfortunate places. Sometimes where we least expect.

Again, a solid film that's not going to blow you away, but one that is bundled and prepared to leave you feeling good, or at the very least, entertained for a while.

Check this out, especially if you are in a so-so mood.