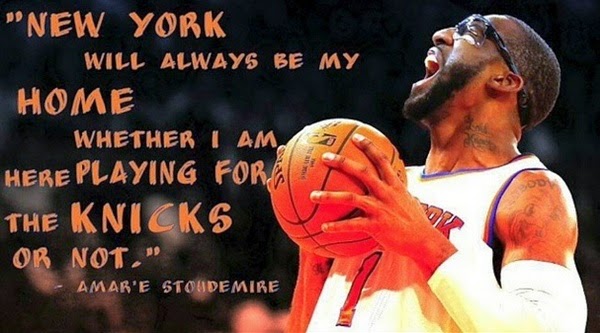 Five years ago, Amar'e Stoudemire signed a huge 5 year, $100M contract, allowing Knicks fans to exhale a little bit in their hunger to walk away with anything during the prized free agent class of 2010. You know, the year this sorry organization that I gave my heart too, pretty much forfeited two years of basketball prior to that summer in another misguided attempt to rebuild.

As I stated on this very blog the day we signed Stoudemire, I wasn't overly thrilled with the signing, due to the obvious warning signs. In fact here is what I stated:

"And although he is not the acquisition every Knick fan wants, and although I originally did not warm to the idea of acquiring Stoudemire when it was first rumored, today I am excited – very excited.

Albeit, I will admit, I am worried about his knee. I am worried about his interior defense and rebound production. And yes, I will definitely miss the one shining light in a dark era that was David Lee. However, the one sole reason I have warmed to Stoudemire as a Knick is simple – he wants to be on the big stage. He wants to be here. He wants a piece of this great city of New York." ("The Knicks Are Back")

On the day of his official introduction, Stoudemire stood in front of the "World's Most Famous Arena" and proclaimed "The Knicks are back!" I loved it. I really did. It meant so much to me as a Knick fan to hear a superstar come here, embrace the challenge of playing here, and really - genuinely - wanting to take this franchise to the promise land, a place it hasn't seen for forty-plus years and counting now.

Of course, we know how the story went. And to be honest, even without hindsight, we knew how the story would go. Stoudemire gave us a MVP-like season, then essentially broke down. And did so badly. New Yorkers watched the crumbling of Stoudemire before our eyes.

And of course there were the moments of the idiotic pre-game dunk before a playoff game, the punching of the fire extinguisher, and the plenty of aggravating times we saw him dressed in very spiffy outfits, rather than donning the orange and blue on game nights.

On the other end of that is the class in which Stoudemire represented the Knicks. Never complaining about coming off the bench, and never truly having any surrounding controversy that would embarrass the organization.

In some ways, Stoudemire, in his brief 7 months as the face of the New York Knicks, pre Carmelo Anthony, of course, was a indeed a credible face of the franchise.

Now that this journey has ended and he is on his way to Dallas to play for the Mavericks, the Stoudemire reflection has begun by this city and all Knicks fans. Some may call it disappointing, others unfulfilled, and a few, merely expected (injuries an all). I can't disagree with any of the those statements. However, if there is one thing I'll add to the growing list of descriptions is respect. Stoudemire was and still is, no offense to the Melo supporters, the first Knicks in a very long time to take the challenge of New York and the Knicks organization when no one would.

Which is ironic, five years later, this organization is in the very same position. Unbelievable...

Regardless, Thank you Amar'e Stoudemire. You tried. Much respect. Go get a ring elsewhere (like everyone else does). I'll be rooting for you.