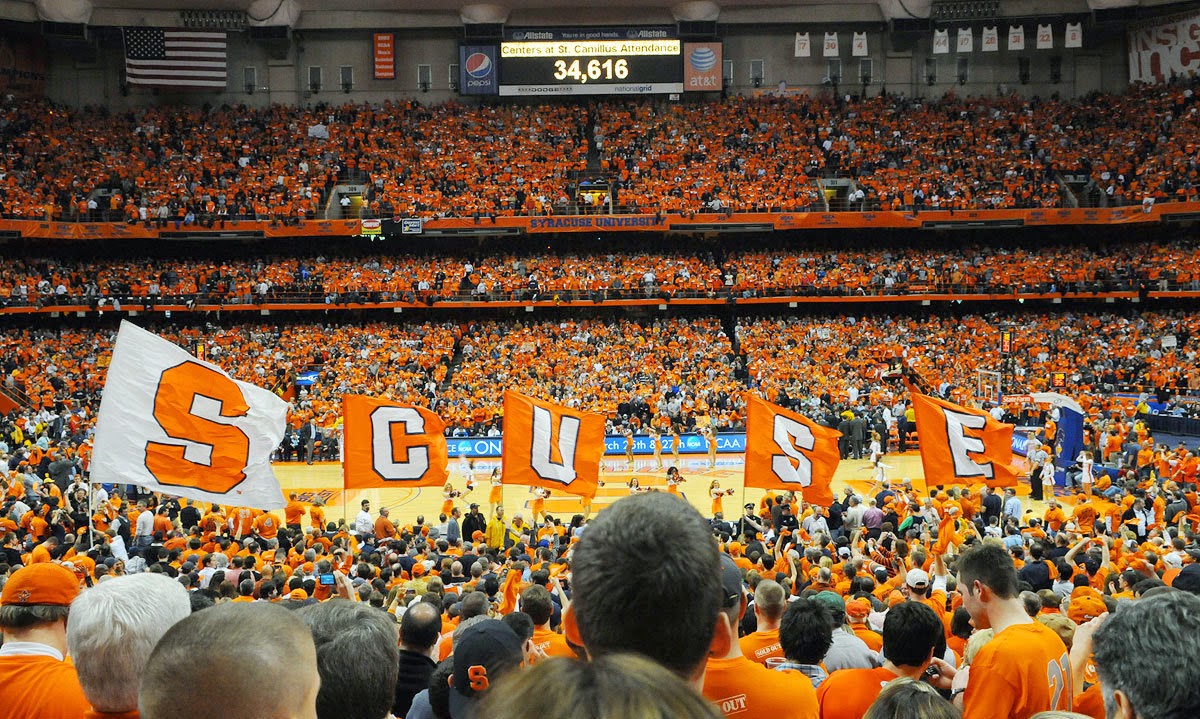 Disingenuous is the only word that comes to mind whenever I think about the recent "Self-imposed ban" by the Syracuse University Athletics department. Even as a member and a professional employee of the NCAA umbrella, it's the kind of situation that bothers me so much about the NCAA, and some collegiate sports specifically, basketball and football. The schools which do very little to educate or prepare it's student-athletes on the merits of the program while cheating and breaking the rules of the governing body it is under.

I'll try not to get on my soap box on this one, but let's be honest, there are a lot of schools out there who break the NCAA rules, not just Syracuse. I'm not naive. However, in respect to the many friends and family I have in the Central New York area who love SU Athletics - and they should - the University's conduct in these findings are gross, negligible, and outright disrespectful to their fans and community.

With that said, there are some quick thoughts I pulled away from this latest situation regarding Syracuse University:

Jim Boeheim is a good coach. Some critics need to relax on attempting to tarnish the coach's legacy with this recent development. Academic Affairs Departments relay eligibility of players to Athletics, and it is very possible that is where they may have been the mix-up. Athletics can only go on what they are told when it comes to grades, eligibility, and NCAA regulations.

However, while I will always knock Boeheim for rarely graduating players and never really winning with meaning (his 950+ wins are vastly empty compared to say a Coach K or some other coaches with lesser career wins, just my opinion), trying to overtly pin this all on him is quite the slippery slope. Did he benefit from this? Sure. But let's settle down with the off-the-cliff claims until further information is revealed.

An average price of $80 for tickets to see the Syracuse Men's Basketball team in a building that is one of the most outdated in all sports in this nation, not to mention to sit on bleachers for your gaming comfort, is quite the sham the University pulls off. I'll say it over and over and over and over. And I will always feel for the Syracuse faithful, who, because of the unconditional and fevered support they show to the team and the University, are gouged for their dollar. And this is coming from a resident of New York City. I get supply and demand. But with no other viable competition, and for a market that is less timid and critical than other areas when it comes to their sporting critiques, the University can get away with it.

Syracuse owes their fans, even more so following this ordeal. Especially the season-ticket holders who outright support the team. Coach Boeheim had some ridiculous excuse regarding the situation recently that simply exasperated the situation. And though defended him a few lines above, his reasoning was troubling to read. Telling your fan base that a home game versus Virginia Tech is worth more than the hope of being a part of a winning season is just crazy.

However long this ban will be once the NCAA hammer comes down, The University owes the fans. Reduced tickets, lowered parking, a free Dome dog - SOMETHING, ANYTHING!

Right Time to Take the Hit

Yes, I'm on board in the belief Syracuse decided to take this ban because A) it may influence the NCAA to issue a softer blow, and B) They aren't having the best season. Were they completely out of it? No. However, what is the chance that this year's club would make a run for a NCAA title?

I'm just at the belief that any program being investigated for what they are being accused of aren't above doing such a thing. And to be quite frank, the timing is indeed dubious. Middle of the season? C'mon! If  they played out the string and had taken the ban next year, that would have been impressive.

Regardless, it's too suspicious for me. And as I stated above - soooooooo disingenuous. The Knicks should use that excuse..."self-ban from the playoffs". Yeah, that's it.

What About The Kids, Man?

This is the thing that bothers me about this situation more than ever. Why do these current student-athletes have to take the hit for a University and program who can't follow the rules or keep their you-know-what together?

For a guy like Rakeem Christmas, it's a shame he cannot continue to improve through the ACC tournament and hopefully one last appearance in March. It's not fair to him, to the rest of a group who were not around during these violations, and definitely for the University to punish this group to save their own behinds.

I would like to see the NCAA add to the rule book the opportunity for student-athletes to transfer without penalty whenever programs come under violations or even "self-imposed" bans like this. All of Syracuse players should have the right to transfer following this season. That includes 2015-16 commits.

I can't say it enough, this "self-imposed ban" is egregious and disingenuous in so many ways. It makes Syracuse look terrible, and quite honestly, they have no one to blame but themselves.

For shame Syracuse University, for shame.