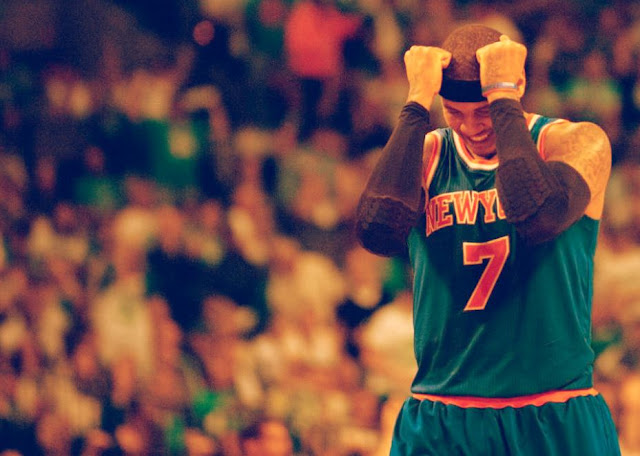 I wonder what Carmelo Anthony is thinking?

It must be tough for him to sit at home and watch these former Knicks play on the game's biggest stage, the stage he has yet to reach, a stage many didn't think was possible, especially when those "pieces" that surrounded him as the centerpiece of the New York Knickerbockers are now household names.

"The Knicks let these guys go?"
"These guys play so much better with LeBron than they ever did with Melo"

I've made it quite known already that Alex Rodriguez is the most fascinating athlete in my lifetime - at least for me, anyways. Check the DP Page of Fame to see that. Regardless, there is something about Carmelo Anthony that is headed in that same direction. Fascinating? Not really. But, frustrating? Absolutely!

I'll be honest, I'm lukewarm on Anthony. Always have been. He seemed like a terrific player from afar with the Denver Nuggets. However, sometimes the ESPN/media hype and the unabashed (and often fickle and reactive) rhetoric from the talking heads make you believe in it all. Highlights can do that. Until I saw Anthony play every night (#KnicksState: Part 3 - Identifying Carmelo Anthony)


Don't get me wrong, the guy is amazing. Unbelievable scorer. Tremendous talent. Heck, the night he scored a franchise record of 62 points on the then Charlotte Bobcats is still one of my favorite moments in Knicks lore (Carmelo's 62 Will Always Be Ours).

Yet, watching him every night, that air in that hype balloon was let out quickly. There is just something about Carmelo Anthony overall that is frustrating. Whether it is the poor shot selection, the lack of leadership that is evident time and time, and time again, or for me, things like him playing in the meaningless All-Star Game and delaying his recuperation and comeback for next season (so selfish), I've soured on his "star".

And let's not forget his constant diatribe of reminding us all of "how close he was to signing with the Chicago Bulls" during this past summer of free agency. Enough already, dude. We get it. You're here, so, you know, act like it and move on.

But with all of that said, one has to think Anthony is a bit chapped about this time, no? Guys he couldn't get it done with - Iman Shumpert and J.R. Smith - are now in the NBA Finals. They aren't playing any better than they were when they were Knicks. Just somehow, LeBron James' unbelievable leadership (in my opinion, his greatest attribute) was able to galvanize these guys into a TEAM buy-in and belief, something he has yet to do with the New York Knicks in four years. And sadly, sometimes even with a better roster.

No, this post isn't about beating up on Anthony. It just seems like the the Carmelo Anthony star has fallen more than it has ever had, and this Finals is further exposing it to depths we've never seen before.

I'm just hoping that this is the final motivating factor for Anthony. Enough excuses. Enough cliche rhetoric. Enough with "building your brand" and focusing on outside projects. This year, and this NBA Finals is the final gauntlet thrown down before Anthony. Are you interested in winning or not?

It's really a weird moment of truth for Camelo Anthony's career, without him actually, you know, playing.

No, he isn't LeBron James, and he shouldn't be compared to him. No one is. James is in another world and is so damn good, it isn't even describable. However, Carmelo Anthony is a really, really good player and that's about it. And for a guy of his potential and overall ability when he truly locks in, really, really good is coming up tremendously short.

Despite it all, there is a part of me that still holds out hope for Melo. Honestly, I still believe someone else needs to come here and be the Batman to Melo's Robin. Whether that's a free agent, our "disappointing" 4th round pick (depending on your outlook), or simply an aging veteran who can take care of the intangibles, I'm not completely closing the book on Anthony yet.

Again, if we can only get into the mind of Carmelo Anthony as he watches these NBA Finals, we would know the overwhelming truth about him. For now, he remains overwhelmingly frustrating to this Knicks fan, and for all Knicks fan alike.