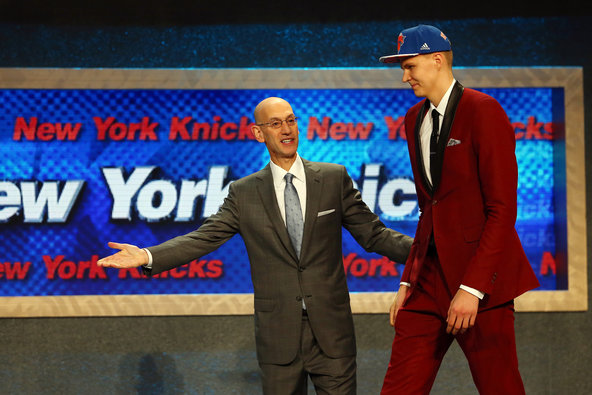 Alright, cue the rant...because let's be quite frank, that's usually what my posts become when they involve my beloved New York Knicks.

I'll begin by getting it out there, clear and out there for all of you - I actually like this year's Knicks draft. Yes, that includes Kristaps Porzingis and Jerian Grant.

Quite frankly, I find the booing and exaggerated "anger" displayed at the draft tonight to be nothing more than media hype and sensationalism. The "Angry Knicks fans" have become a caricature of the fan base on draft night, and those in attendance do so just to have their moment on television or on social media. I truly believe that.

Look, Porzingis was becoming the smart basketball fan's pick over the last week and rising on every mock draft board there was. Everyone raved about him...UNTIL the Knicks selected him. Then he became you know (fill in the blank of any European player considered an NBA bust). Because this never existed.


After all, you listen to talkin heads who make their living on being a contrarian and making over-the-top statements with little accountability knock the deal because Porzingis "doesn't help the Knicks right away". Such garbage. Because everyone followed that negative statement by uttering that he may be the best player from this draft in two to three years.

Ummm, what?! None more than Stephen A. Smith who blasted the pick with the same ridiculous reasoning, who did so with the intent of being angry on national television. Stop it. Just stop, please.

Hang on, I really want to hear Stephen A. Smith's impassioned, strong opinions on a basketball player he has never seen play.
— Jeff (BPredict) (@BPredict) June 26, 2015

Especially since Smith has a history of saying some outlandish things. I remember him disliking the Iman Shumpert draft selection in 2011 and stated the Knicks will regret the day they didn't select Chris Singleton. You know, the same Chris Singleton who now plays in the NBA Development League. He once called Knicks fans "ridiculous" for calling into his show in bunches to state that David Lee was better than Eddy Curry. We ALL know how that worked out.

Come to think of it, why do the Knicks have Spike Lee and guys like Stephen A. Smith representing the Knicks fanbase when truly, they never have the same outlook as the real fanbase?

I think Porzingis will be a star in New York. More elite GM's believe in his talent than any other player in this draft.
— Adrian Wojnarowski (@WojYahooNBA) June 26, 2015

Back to my main point, none of us know what Porzingis will be. Draft grades are determined years from now, not on draft night. And quite frankly, when trusty NBA journalist Adrian Wojnarowski says executives believe Porzingis has the best "upside" (I love draft lingo), then I tend to lean that way. Sorry.

As for "not being ready" as Porzingis is being described and singled out for, how in the world is a kid who plays one year of collegiate basketball more "ready" than a 19 year old who played among men in an international league - the second most competitive league in the world? All of these guys in the draft need 2-3 years before we get the real product.

Just goes to show you how we overrate, overvalue, and are bias towards the American players who we see play in the NCAA tournament.

Regardless, staying on Porzingis, the  dude is 7'1" with super athleticism and a great shooting ability. I'll take my chances on that potential, because that is all it is, potential. That's what all of these guys drafted last tonight are. We're still waiting for Anthony Bennett, the number one pick in 2013, to be the guy worthy of his draft selection. And it's looking like he may never be that.

I'm not trying to start the Porzingis fan club here, but can we pump the breaks on the writing the book on his career?

And by the way, can we stop comparing all white guys to Dirk Nowitzki and Larry Bird?! I absolutely hate that. Hey, this white guy can play! Then Jalen Rose wants to tell us he reminds him of Larry Bird. Come on, dude.

As for Jerian Grant, again, I didn't watch enough Notre Dame basketball, but from the video clips on YouTube (how can anyone look terrible in highlight videos?), he looks like he fills a serious need. Then again, we need everything.

However, I wasn't a fan of Tim Hardaway Jr. who pulled the trigger on a shot that was more inconsistent than JR Smith. So I was happy to see him go, especially for another high quality pick. And from my excessive extensive research, because I'm an absolute NBA Draft nutcase, Grant seemed like one of the steals of the evening.

But again, like Porzingis, we will see. Let these guys suit up and play some ball! I am pretty excited for Summer league than I was for games this past season. Hope is in the air!

One last point - it's quite interesting to see the reasoning for the guys the Knicks brought in. Phil Jackson referred to Porzingis' attitude and character along with his family support several times before even mentioning his basketball abilities. Grant is a four year player from Notre Dame. Hmmmm. I like it. I'm so done with the headaches.

Anyway, I'm done with the latest rant, and will now exhale on the idiotic hate and outlook out there. I really hope the Porzingis pick works out just to see the backtracking many will do. But whatever, I'm a Knicks fan, it comes with the territory.

For now, I await the real re-building portion of this Knicks roster that begins on July 1st - free agency. That should be lots of fun...and heart ache as usual. Go Knicks!