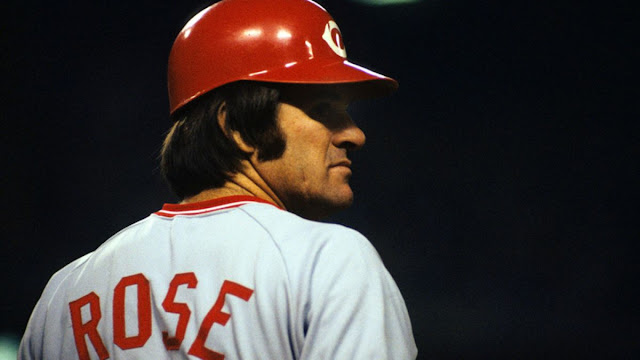 We live in a very forgiving society, especially when it comes to our sporting culture. We've offered the extensive olive branch to various athletes who have owned up to their short comings in some mysterious indirect way, or just outright apologized for their grievance to our society. Of course, as always, performance and/or some type of past equity plays a role here. Just ask Alex Rodriguez.

But when it comes to Pete Rose, his plea to be reinstated in Major League Baseball, and possibly a induction to the Hall of Fame, I'm all out. I'm done. No. No. No. And again, no.

Yes, Pete Rose is the all-time hit king at 4,256 hits. That's a whole lotta hits! And it is such a shame that baseball's two biggest records (hits and home runs) are tied up in controversy. I also understand the some who want Rose in the Hall of Fame for historical and educational purposes.

However, if the findings by ESPN's Outside The Lines crew are legit, and it seems to be in every way, then Pete Rose deserves the door to be shut on him for good. I really mean that. Just my thoughts.

He denied gambling on the game for years before admitting to it right before releasing a tell-all book, which I already wasn't a fan of. It reeked of Rose profiting from the game again. Of course, with the confession was a another footnote, he denied betting on his own team. And now we get the truth that he did. Which to be honest, is very telling about Rose's character then AND now, due to the fact he refuses to own up to his wrong-doing.

He just looks like a liar. A big liar.

Baseball has one, single cardinal rule - don't bet on the game. Simple. It's a good rule, an important one, and one in place to protect the game forever. Baseball - heck sports! - can survive a lot of things, and it's proven they can, but gambling and the idea that the outcome of games are fixed is not one of them. It almost killed baseball in 1919 due to the White Sox Scandal.

That's three big strikes on the all-time hit king. The biggest out he'll ever make.

Pete Rose lies just about as much as he hustled on he baseball field, which is unfortunate.

Again, Pete Rose may say he loves the game, but he's done nothing but lie and gamble away the little integrity he brought to the game.

For me I'm done. Hit king or not. I'm forgiving, but three times the charm.