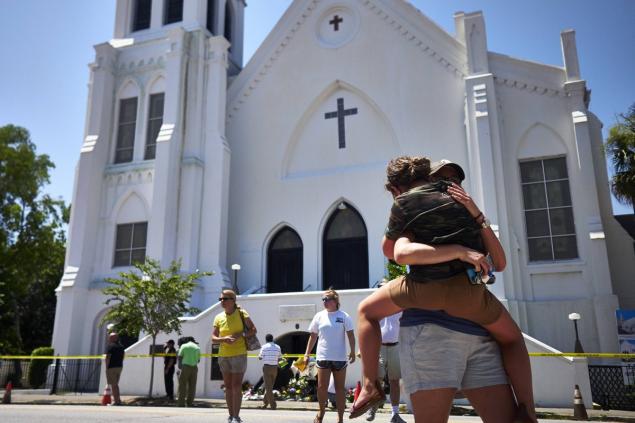 There has been oh so many issues regarding race, and how we as a nation tackle the issue together. We've gone through quite a bit lately, a lot of it disheartening, and much of it strong enough to raise some serious issues that plague us as a community. And of course, there are some others that were purely race baiting issues that devalue the serious topics and concerns - nonetheless, issues are before us and in front of us.

And quite frankly, it's clear, something just is not right.

Obviously, we can all take race relations and talk and in this case, for me, write about it for hours on end. However, the recent shooting in Charleston, South Carolina is one that has really bothered me. While the issues of police/authority and it's relationship with minorities is of concern, especially after watching the issue regarding those children in Texas who were at a pool party, there is just something about this incident that really concerns me. Almost angers and saddens me at the same time.

First and foremost, race aside, where are we as Americans, all of us, safe anymore? Over the last decade we have seen mass murders inside of temples, churches, military bases, schools, and even movie theaters. Have we come to a place as a society where life is devalued so much that the most sacred places - the most public of places - are now a security threat to terrorism?

Second, say what you want about race relations and how we view and perceive one another among our differences, but apparently we haven't come far enough when white supremacy and such thinking is still an issue within the current generation. Think about the mind set this young man has, especially when you read his manifesto on why he did what he did.

With that said, what truly saddens me is the issue of everything that indeed surrounds it. Nine innocent men and women were killed inside of a church. A church! Yet, somehow, the focus has been lost.

My prayers go out to the victim's families, friends, and loved ones.

Yet, all we hear about are politicians looking to discuss gun control laws. Rick Perry, sir, calling Charleston an "accident" is atrocious. Actually, rather ridiculous.

We have a state in South Carolina which still flies the confederate flag proudly and honors the confederacy with statues around the city. And yes, there is an actually debate - a real and legit, back and forth discussion! - on whether the flag should fly atop government buildings.

And there is the side story of the judge calling the shooter's family "victims" as well. I won't even dive into that. Even more dumb than Perry's statement.

Forget the many disputes with police officers, when people of color aren't even safe when gathering in a place of worship, how can there be any sort of social confidence in our society from minorities with all of the previous stories and occurrences over the past year?

All in all, I typically try to stay level headed on these issues, but there is just something about the months of egregious stories leading up to this that makes me feel like being black in America still isn't necessarily a safe thing.

That feeling is the scariest, and truest of them all.

What's going on in our nation?