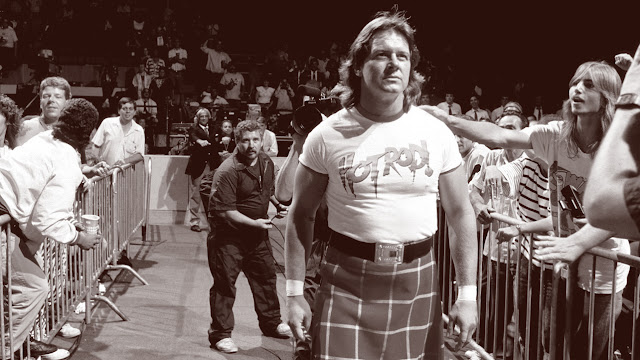 It's been rough year for pro wrestling already in losing some greats. For pro wrestling fans, not just WWE fans, but all fans, we've lost Perro Aguayo Jr. in a freak accident where he died in the ring, and of course, the legend that was Dusty Rhodes. Now, we deal with the passing of "Rowdy" Roddy Piper.

If you're a wrestling fan reading this, I am not even going to describe what Piper meant to wrestling fans and pro wrestling. You just know it. He was one of the handful of wrestlers who made the transition from pro wrestler to cultural household name.

If you're not, just know this - Piper was one of the best "bad guys" ever. Seriously, ever. Before liking heels and being a fan of the "bad guys" was cool, Piper made being that guy so interesting and enticing for fans.


There are so many moments Piper has given us. His personality was his greatest attribute. His mic skills, which were so infectious, so attention-grabbing, so one-of-a-kind crazy with just the right blend of intelligence, all of it embodied a character that was larger than life. Because quite frankly, many of these men and women who were such a huge part of our childhoods were in fact that exactly that.

Rowdy Roddy Piper - when bad and being heel was cool before we even knew what being heel was. RIP Hot Rod
— Dome Pondering (@DomePondering) July 31, 2015

To be honest, many of my favorite moments of Piper were his entertainment, his wild promos, and his undeniably unique look of wearing a kilt and his classic "Hot Rod" t-shirt. I stated it earlier in my piece regarding Dusty Rhodes' passing (Remembering Dusty Rhodes), but it's the type of uniqueness and personality that is indeed missing in today's pro wrestling scene among all of the flips, dives, no selling of finishers, tables being broken, gimmick matches, and useless in-ring promos.

Actually, among Piper's matches, I distinctly remember two of them. The first being his classic with Bret Hart at Wrestlemania 8 and the fitting spectacle that was his brawl with Goldust (another character on the rise then) at Wrestlemania 12.

For me, Piper is the sound of the bagpipes hitting the speakers of the arena and the rush of knowing things were indeed about to get crazy. It was his on-air feud with Cyndi Lauper. It was one of the best heel turns in history as he crushed a coconut over Jimmy "Super Fly" Snuka's head. And it was him setting the tone for what has become the spectacle that is Wrestlemania with his stare down with Mr. T at the very first Wrestlemania.

Piper was one of a kind. I can't say that enough as a fan. We often say things like that for all of our heroes and childhood favorites in mourning, but truly, Piper changed wrestling in so many ways, and transcended it so many times, that it's hard to really wrap your mind around it thoroughly.

After all, when we think we have all the answers, he changes the question. So fitting.

Thank You, for all of it, "Rowdy" Roddy Piper.