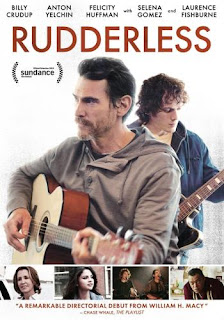 After the death of his son, a man struggles to deal with the issue. He attempts to find some relief through the music and lyrics of his deceased son but ends up doing much more.

After his son's former girlfriend outs him in front of the band, Sam heads to his son's tombstone to find it defaced, where we learn that he was indeed the killer in the school shooting.

"Take a breath and count the stars.
Let the world go round without you.
If you're somewhere you can hear this song
Sing along."

Rudderless is an interesting film that I honestly do not have a grasp on. I understood the film, enjoyed it very much, but because of what the film leaves to the imagination and of course, emotion, I'm still struggling to really wrap my mind around it.

Quite frankly, the film really hooked me big time once I learned that his son was the killer. Suddenly, the film took on a whole new meaning, and the cliche emotional tie you thought this film was, suddenly bottomed out with a big dose of, whoa, holy...well, you know what.

Rudderless is a solid film that really pushes the tough buttons on life, the ones we often don't see in movies that make us feel uncomfortable or conflicted. It's a good watch, of course, with some pretty great lyrics and tunes thrown in. Give it a chance if you can - very much recommended.