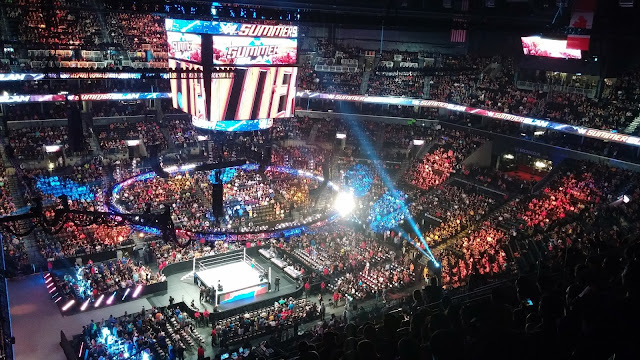 There is just something about pro wrestling and the New York City area fan base that just seems right. It just feels like a perfect connection. I'm not looking to be a homer, or give my hometown and current city a plug, but the two have always fit together.

So when this past weekend came around, I'm sure many pro wrestling fans in this area were excited. The weekend was filled with various events, and the cards were all stocked. All in all, it was a good week to be in NYC (more so Brooklyn). I managed to attend ROH's Field of Honor and of course, the big show, SummerSlam. Below are some quick thoughts on what was an absolutely fun weekend.


- In the two years in doing Field of Honor, ROH hasn't really surpassed TNA's attendance when they once held shows at MCU Park, however, there was something really fun about this show. In fact, it was more enjoyable than some of the latter Destination America tapings which TNA held at the Manhattan Center. For me, I think it was the crowd reaction and connection. ROH fans are super, super passionate, and are well connected to the wrestlers, which made for a fun night.

- The overall set up of ROH was slightly different than last years and what TNA used to do. They added ringside seats around three sides of the ring, and even added some lighting to the entrance way that really made for a visual. After all, there isn't much you can do to dress up a baseball stadium with fans on one side of the ring, but ROH really did a good job.

- Like last year's event, ROH's Field of Honor is a pure pro wrestling fan's dream. There was almost four hours of wrestling, much of it VERY good action and entertaining. And kudos to ROH who do a good job in tying these smaller house shows in the overall flow of their product. It makes the show mean more, and fans don't feel alienated in attending any of their live events.

- Dalton Castle is so over and entertaining. You can tell the casual fans (you know, the girlfriends who were dragged along for a strange date night) and they were all about him. And his entrance is just as cool.

- On the other end of the "cool" spectrum was Kazarian and Chris Sabin who both entered the gauntlet to very little fan fare. Remember when both were once considered the future of TNA? Heck, Sabin was once TNA World Champ!

- Another cool moment was Bushwacker Luke who was a surprise entrant in the same gauntlet match. Luke was immediately clotheslined out of the ring, and recreated the old Royal Rumble popular moment by marching around the bases. Really funny and entertaining moment.

Actually, ROH had plenty of comedy and entertaining spots that kept the night fan friendly, which I'm sure some casual fans appreciated.

- My absolute favorite part of Field of Honor was being able to see some of the stars from New Japan Pro Wrestling, live. Nakamura, Watanabe, The Time Splitters, and of course, Okada, were all very over with the fans, and put on a heck of a show. Especially, Okada, who easily had the match of the night with Roderick Strong. Very, very good match. Actually, my favorite of the weekend, SummerSlam and NXT included.

- I managed to watch NXT Takeover on Sunday morning prior to heading down to the Barclays for SummerSlam and I'l say this, Field of Honor was a better show top to bottom. However, Bayley and Sasha Banks really, really delivered. Kudos to those two who rose to the hype, matched it, and even surpassed it. I especially enjoyed the moment they had following their match with the Charlotte and Becky Lynch. Wrestling needs more of those moments, especially when they meant so much to what the WWE is doing now with Women's wrestling.

I hate giving into the WWE's marketing hype of "Diva's Revolution", but the WWE does have a VERY good roster of female wrestlers. Development of talent is key in today's market, and they are very much benefiting from that investment.

Despite the Field of Honor comparison, NXT was still a very good show. Kevin Owens vs. Finn Balor was another good match on the card. The WWE are doing plenty of entertaining and catchy things while giving various aspects for all fans - sports entertainment, young wrestlers, older veterans, attracting the online community, and even keeping the casual fan. It's a dangerous combination for other companies who have a niche  that may offer a product to a targeted audience now being covered by the big machine.

- As for SummerSlam, it was an absolute blast to be there live for the event. An absolute blast! I'll just begin with the obvious, no one does production and presentation like the WWE. Even being there live, the video packages all made you want to watch the upcoming match. Even the ones that weren't all that enticing felt a bit more interesting after their presentations *cough BigShowMiZRyback*

- The New Day are absolutely tremendous. Talk about three dudes who took something and really made it special. Pure entertainment.

- My absolute favorite chant of the night was the dueling "Where is Roman?"-"Roman's sleeping!" chants as Roman Reigns laid on the outside floor for quite a long time as Dean Ambrose got worked over by the Wyatts.

- I had no problem with the Cena/Rollins finish as it did exactly what the WWE does - generate publicity. The inclusion of Jon Stewart was a huge plus while also shining the light on Cena's new chase to break Ric Flair's record. Another added notch that is a great idea.

Though, I will say this, Rollins needs to ditch the all white gear. NOT a good look.

- I have to admit, I wasn't sure how well Undertaker would hold up in this match vs. Brock Lesnar. As always, Undertaker delivered. The guy is a legend. Who is more of a franchise player than the Undertaker in WWE history? That's a serious question. Longevity. Loyalty. Evolution. Entertainment. And of course, Effort. He really does present a good argument.

Nonetheless, The finish did stink. Despite the logical replay showing him tapping following the match, the quirky finish did send us all home on a questionable notice. Regardless, it set up Monday Night Raw which is what needed to happen anyway.

- Overall, SummerSlam was an absolute blast. So much fun. Actually, a great weekend all around for pro wrestling. One of the many things I did think of on my short train ride home after SummerSlam was indeed the lack of TNA interest at the moment. I barely thought about TNA. Not even in discussion with other fans. Talk about a total absence of the product from anyone's being at the moment. The company just seems stuck in the mud. Not bad. Not great. Just well, there.

Especially as ROH builds to there next event (All-Star Extravangaza), and RAW delivered some surprises and angles on Raw that should keep everyone hooked as we head into the Fall, and eventually the Road to Wrestlemania 32.

Maybe that's the problem, TNA doesn't have anything that feels, well, special. No big events. No live events. No real special moments. My fear of them becoming a "TV product" was the brand losing connection to fans. A real tangible connection. But eh, pro wrestling has its ebbs and flows. Whatevs.

Again, it's weekends like this one I won't forget. Over 8 hours of live pro wrestling, and two other great shows down the road from me that kept me hooked to my couch. I admit, there are times I feel burnt out on pro wrestling and even let the doubt creep into my mind that maybe it's surpassed what I look for in the medium, and then weekends like this come around where I realize I just can't shake this addiction. I'm too deeply rooted in it. I spent my entire weekend watching pro wrestling and I still had the urge for more.

What a weekend. Won't ever forget it.