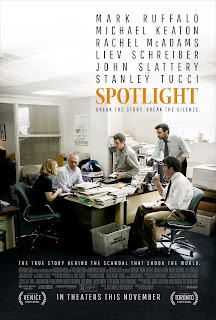 The true story of the Boston Globe and their investigation which uncovered the scandal of child molestation and cover-up within the local Catholic Archdiocese.

While sitting in the room right before the story officially went to print, it was revealed to the crew that Robby had the info needed years ago, and never followed through on it. A guilt he must have carried throughout the entire investigation.

"They say it's just physical abuse but it's more than that, this was spiritual abuse. You know why I went along with everything? Because priests, are supposed to be the good guys."

Spotlight is a movie that will punch you in the gut. Believe me. It will. The film is surprisingly a very good film, with extraordinary acting, and most of all, an impactful message. And yes, the message is where you will feel the punch the most.

The story of how this group uncovered the ring of molestation of children by the Catholic Church is thought provoking, and for me, left me troubled with thought and a tad bit angry.

As stated, where Spotlight shines best is indeed the acting. The film boasts an all-star cast of Michael Keaton, Rachel McAdams, and one of my absolute favorites, Mark Ruffalo, who really carry the film.

Spotlight is a fantastic watch. Entertaining, thought provoking, enlightening, and overall, emotional. Definitely a great watch for all.