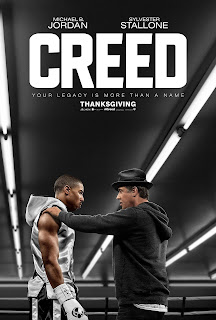 Adonis Johnson, son of former World Champ Apollo Creed, seeks out his dad's long-time rival and friend, Rocky Balboa, to train him and help him become a professional boxer.

After arrogantly walking into a gym in LA and knocking out the first person he fought, Johnson is dropped by an experienced fighter in a scene where the camera falls and hits the mat as he does.

I'm completely torn on Creed. On one hand, I am very impressed in how Writer and Director, Ryan Coogler and the way the story of Rocky will continue in a new and modern age. On the other hand, I'm just ready for the story of Rocky to just be. Like, just let it live on it's own.

In my opinion, Creed just feels like the original Rocky. And of course, with a sequel coming, it feels like we are going down the road of a series that is building off of Rocky, and simply, just replaying it. I hope I am wrong, but for now, that's where I am on this.

As for the good stuff, Creed is shot tremendously well. Everything about the cinematography, the camera angles, the modern feel of the underdog story, is simply tremendous. The boxing in the film feels 100 times more authentic than every part of the Rock series that was allergic to blocking.

And of course, Michael B. Jordan was absolutely fantastic. And I was a big fan of Rocky keeping his classic "Rocky-isms" and one-liners in the film.

All in all, I wasn't blown away by Creed, and it doesn't feel like a boxing film that moves away from the easy-to-fall-into hole of feeling like Rocky. Regardless, it's a very good moving visually, and still very entertaining.