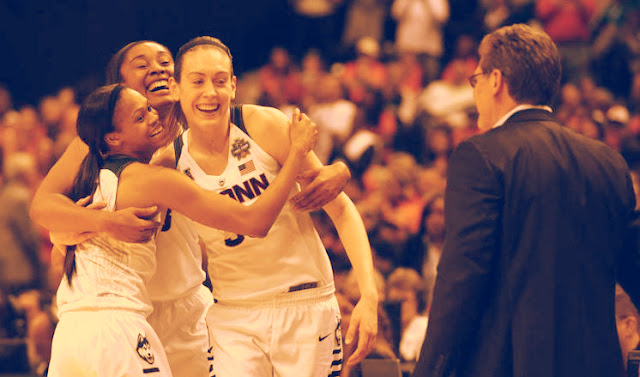 Sometimes, it's amazing to me the double-standards which we support in our society. In an era where ESPN drools over the entity and prowess that is LeBron James; Sports radio cannot contain itself in the persistent hyperbole conversation regarding the Golden State Warriors; A generation was not too long ago obsessed with the idea of anything that was Tiger Woods in his prime; Football-heads laud the consistency of the New England Patriots; and of course, every coach in America recites the words of John Wooden in praise of those once glorious UCLA teams; it's quite amazing to believe many are finding an issue with the UCONN Women Basketball team.

I get it. I do. Many already find women's basketball to be less entertaining than the men's game. However, the idea that this insanely great team is bad for television, bad for college athletics, and overall, bad for the game is absolutely beyond me. Quite frankly. it's mind blowing.


Have we come this far in our over-evaluation of sports that we now punish teams for winning too much? Even scarier, in a world of draft picks and their importance to the future, we often encourage teams to lose as much as possible - at times applauding the decision as smart! The participation-trophy-atmosphere that is now flooding our sense and fell of and for competition is unbelievable.

On a night when the UCONN women won their fourth consecutive title, capping off an undefeated season as well as an unprecedented fourth national title for Breanna Stewart, Moriah Jefferson, and Morgan Tuck, I am in absolute awe of the accomplishment. Seriously, wrap your mind around a collegiate athlete winning a national title every year of their college career. I still struggle to do so.

Would critics ever consider the Patriots a hindrance for football? Did anyone ever think Tiger Woods was bad for golf? I surely do not see many turning away from being interested in the Golden State Warriors. I'm not saying it's outright sexism, though much of it is, but there is a clear double standard in the reasoning.

The fact is, all dynasties die. The UCONN women will as well. Why not appreciate the program's dominance, focus, and overall excellence?

What little girl doesn't want to aspire to be these ladies? Why not empower these women like we do to the likes of LeBron, Tiger, the Patriots, Warriors, and so many others?

Again, this last UCONN championship proves how over-intense, and somewhat ridiculous we have become in examining sports. We've become more about the speculation and disrupting the possible silver lining, rather than just enjoying what we see on the court.

I never thought I would see the day when winning too much became an issue. Wow.