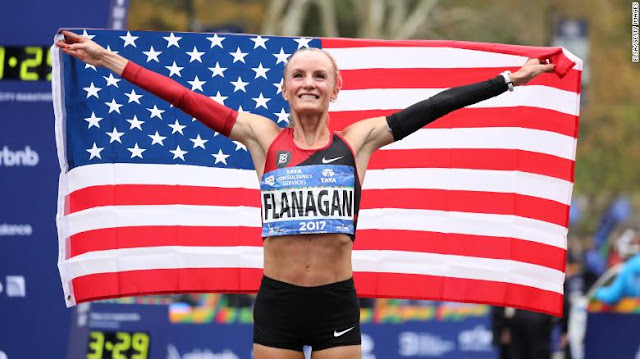 1. Shalene Flanagan - Running 26.2 miles always boggles my mind. I'm mentally and physically exhausted once I hit four miles. I'm the worst. Regardless, Flanagan's NYC Marathon win today was epic and momentous in becoming the first American-born runner to win the race in 40 years.

2. Houston Astros - What a World Series! As their tag ling stated all year, they "earned history" with a spectacular year, and a gutsy playoff run. Honestly, any one else still in awe of AJ Hinch's ability to win the whole thing with the bullpen - that bullpen that he had?

3. Deontay Wilder - Despite the many flaws that surround the sport, there are fights like this past Saturday night that keep hope and interest alive. Please peep Wilder's knockout victory - and several knockdowns - in the first round. The dude is a monster! Boxing has a legit draw for the sport. Hopefully, he's taken care of, and the sport uses his talents wisely.

1. Texas Church Shootings - So now we're not even safe in a house of worship?! Ugh...

2. Manhattan Terror Attack - I shared some thoughts on this from earlier this week (SEE HERE), and it's still baffling to me that this is the world we live in. Where gun fire and trucks, or who knows what else, ant any time, any place, can kill you. Seriously, what the...

3. Terrorism and Gun Control - Anyone else surprised how quick our government is to call attention to terrorism when the suspect is of color (or of certain ethnicity), and just as quick to follow up with it on agendas that feed the narrative for the push for change in immigration and other policy? You know, the kind that will "keep us safe".

However, if the shooter is white, such "causes" for the happening goes silent. We're the only country on earth with such mass shootings. And whether we like to admit it, we have a domestic terrorism problem, and my goodness, if we judge by the same spectrum we do other "terrorism issues" - white people are at the center of this. Just bloggin...