Too Close to Home, Again 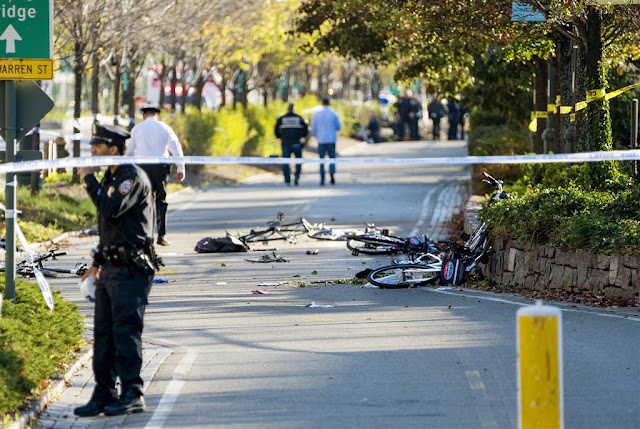 It's a location I know so well. I visit there. I send people there. Heck, I've worked there.

And today, it was the scene of terrorism.

Imagine the horror and the absolute shock I endured to read and hear of the happenings of a truck going down the West Side Highway bike path plowing over pedestrians before slamming into a school bus near Stuyvesant High School.

It's one of my favorite places in the City - with it's access to the river; it's openness and inviting feel during the summer time; for it's unique events and its penchant to run into celebrities, and of course; for it's bike path which is every New York cyclist's dream - myself included.

It's bad how vivd this whole thing is in my mind without having been there. Like, actually there!

I know exactly the area where this living form of evil turned his truck onto the bike path, and every single Pier, block, and sector he passed along the way. I know the demographics of the people who frequent each of those sections, too. The wide-ranging flair of it all that this very park carries - all walks of life - from across the world, even carrying it's neighborhood-like gravitas with so many common faces - ALL OF IT! - I'm just so familiar with it.

The idea that THIS very place, just a mere few blocks away from the Freedom Tower, and 9/11, and where the Towers once stood, is the location where eight innocent people lost their lives today is beyond me. It's too close to home.

"Not again. Not in this city.", is all I keep coming back to in thoughts.

As I left work, the commotion of flashing lights and police officers guiding vehicles away from Houston Street (leads to the West Side) was a quick reminder if you somehow managed to change focus for the evening commute. The always-busy street was now completely barren as you stare towards the West. It was utterly eerie, and in many ways, frightening, to think we're still this vulnerable.

That these types of days are still possible.

And really, that there are people who still carry such evil with them.

Terrorists they call them. And with that came the nugget of thought, along with the little bit of rage that crept up in the fact that word - you know, terrorists - was never used several weeks ago in Las Vegas.

The world is just throwing too much at us right now.

What a crazy day here in lower Manhattan.

When will this ridiculousness end?
— Dome Pondering (@DomePondering) October 31, 2017

But even in attempting to make sense of all if, or at the very least, simplifying what happened today, I just shake my head in disbelief thinking about those eight individuals - and knowing the general vibe of that bike path and area - that it never once crossed their mind that in the midst of a bike ride, or a jog, or enjoying a Fall day, or even discussing Halloween plans, that this was remotely possible. Remotely a caution factor in that moment. It's just so senseless. All of it.

I love this city. Always will. But it's days like this where an attack begins to feel like it's just another one too many, until of course, the next one occurs, ultimately knowing these days will continue to come. That truth is horrifying in so many ways.

Regardless, as "simple" and as "non-complex" as the investigation is attempting to make the suspect's plans in this attack seem, it's just one that boggles the mind and confuses the thoughts of yours truly in so many ways.