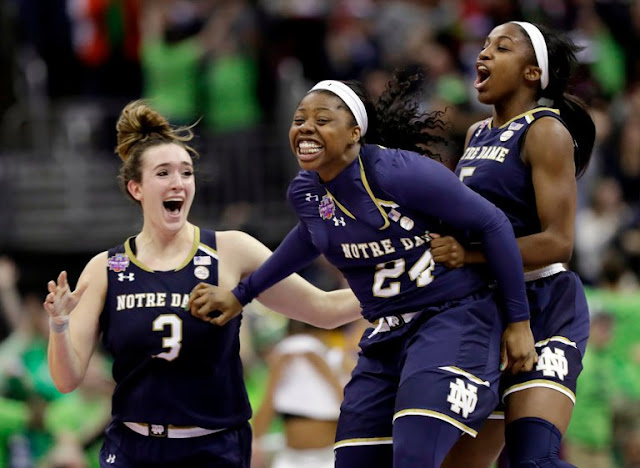 1. Opening Day & Baseball - Mannnnn, it's absolutely tremendous to have baseball back! And right away, the game brought so much entertainment and interest. So glad to have the great game back, and back every-single-day.

2. New Human Organ? - This could be a major breakthrough for the fight against cancer. The idea that science is still adding new chapters and parts to the human body is astounding and mind blowing. The human body is such an amazing thing - such a complex and interesting, yet, beautiful thing.

3. Arike Ogunbowale - Two game winning shots, including one launch to win the 2018 National Championship for Notre Dame - Orgunbowale, have a week!

1. Laura Ingraham - This woman is absolutely nuts. Not sure how so many defend her, or even, how so many entertain listening to her, but she has an audience that believes in her and her message each night. Regardless, her words towards Parkland survivor, David Hogg, now has her and her show on FOX News reeling from the removal of sponsors. The worst part of all of this is not the removal of her show, but the mere fact what politics have become in this country. SMH.

2. Howard University Financial Aid - Such a shame. Such a disheartening thing to hear about Howard University. HBCU's already deal with strict budgets, and under the current administration - reduced funding. Now, Howard must deal with crooked dealings from within. SMH, again.

3. Heineken Advertisement - Sure they dropped the ad, but seriously, who approves this stuff?

1. Darius Bazley - The flood gates are now open as Bazley spurned Syracuse University and is headed straight to the G-League following High School. Expect more to head this way as years of abuse of the system by AAU and Division I programs come to a head. Especially so, if Bazley's growth and path is deemed fruitful. Always tough to be the first, but it should be interesting as we move forward.