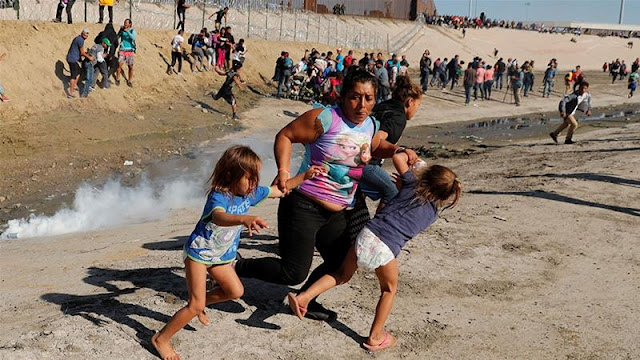 1. Thanksgiving Holiday - Thanksgiving is always a good time. Family. Food. And of course, giving thanks for the many blessings we have - and often overlook all year long. I hope it was a good one for all of you.

2. Zachara Brothers - In a week of celebrating family, it was two brothers who found humanity in themselves to give of themselves in help of the devastating California wildfires. The Zachara brothers drove from Chicago to California in an effort to help the animals in danger from the situation. That's some top notch stuff. Much props to both.

2. LeBron James - I read an interesting stat the other day. Of all players in their 16+ season in the NBA, there are only 5 50-point games. 1 by Karl Malone, 1 by Kobe Bryant (his last game), and 3 by LeBron James. Three! And in an odd way, he's getting better. It's just crazy.

1. Immigration - Obviously, the situation at the border became a heightened one in our news conscious this past week. However, What makes the situation even worse is the crazy ways immigration and immigrants are perceived in the news, and by many. It's a shame how human decency and rights are being manipulated for political power and gain.

2. Mall Shootings - More mass shootings. It's insane how desensitized we have become to these happenings. Barely made the news...

3. Dwight Howard Saga - Saturday night got really weird on Twitter for Dwight Howard. Despite the awkwardness and the awaiting (and inevitable) "Rise and Fall" story of Dwight Howard's career, the comments and reaction to the situation are unfortunate. It revealed that we have a long way to go in many realms and communities. And yes, it's also a shame the potential Dwight Howard has wasted due to personal decisions. Just my opinion...