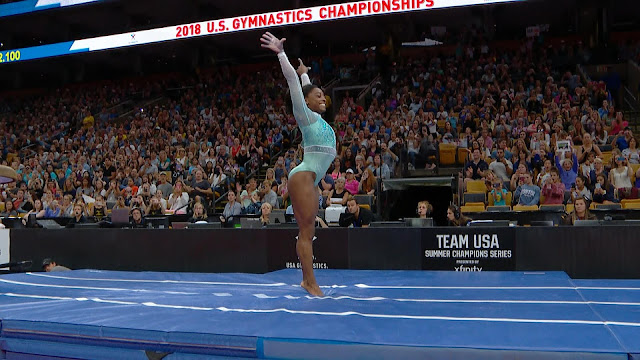 1. Simone Biles - If Simone Biles wasn't awesome already, add another World Championship to her resume with so many descriptions that scream domination, such as her winning her 4th all-around title. Biles' medal collection is ridiculous. Quite a run before 22 years of age.

2. NYC Marathon Winners - So much props to Lelisa Desisa of Ethopia and Mary Keitany of Kenya, who both were amazing today in winning the NYC Marathon. Marathons are still such an amazing feat to me - props to all participants, finishers, and those currently training for the future.

3. Google Staff Walkouts - Kudos to the employees of Google who walked out on Thursday in protest of the handling of sexual harassment payouts. The idea that those with allegations against them were paid $90M - 90 friggin MILLION! - as a settlement. Seriously, how does that NOT make any employee upset? Or any human being?

1. Kanye West - I thought about putting this under "1 Dumb". But really, Kanye might have the "Idiot of the Year" Pondy all wrapped up for 2018. I'm not sure if it's a true realization that he was being used, or maybe he's now felt the backlash, and that it might not be good for his music going forward - whatever it is, it's downright SMH-worthy. This dude is unbelievable.

2. 14th Amendment Change? - I don't get all bent out of shape regarding the President - I believe you'll just go crazy. However, this 14th Amendment change talk really did get to me. Quick thoughts: we all know this has nothing to do with immigration, and is more about "choosing" who is "American". And second, in regards to the arguments of the 2nd amendment, are we now willing to go to the table to adjust the Constitution to modern times? Double standards - yup, more 'Merica.

3. FOX News Fear-Mongering - Again, watching and reading some of the ways the immigrant Caravan are being described is just crazy. FOX News attempting to label this as an "invasion" and military personnel being deployed for this is just insane.