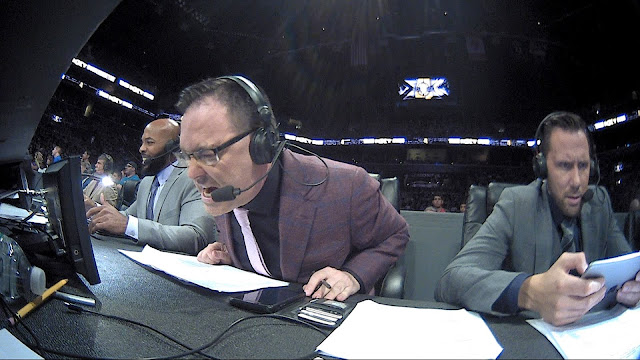 1. Caris Levert Injury - Sure, it looked nasty (and felt downright sad) at first, but the diagnosis, fortunately, was just a dislocation. If you saw the injury, it's pretty hard to imagine that Levert will be back this year, but he will be. And after watching him ball for the Nets thus far this season, that's good to hear.

2. Mauro Ranallo - I'm throwing Ranallo some love this week. NXT Takeover was absolutely fantastic this weekend. And really, so was Survivor Series - the WWE killed it. But damn, Ranallo makes NXT so exciting. His energy as an announcer is so infectious, and it's what pro wrestling has missed since the days of Jim Ross. The guy is just the best.

3. Patriot Act - I started watching Hasan Minhaj's Patriot Act show on Netflix this week, and it's an awesome show. Politics. Comedy. Culture. Comedy. Relatable. Comedy. But most importantly, so informative and so profound, on so many topics. Good stuff. I was a fan since seeing his days on The Daily Show and of course, his Netflix special. I'm hoping this works out for the dude.

1. California Wildfires - It's heartbreaking. What got me this week (besides the growing numbers, of course), are the before and after photos of towns, streets, and homes burned to the ground. It's absolutely devastating.

3. Quick Trigger on Holiday Shopping - I get the time is on the cusp, but come onnnnnnn! Can we let Thanksgiving pass before we start the commercial rush?