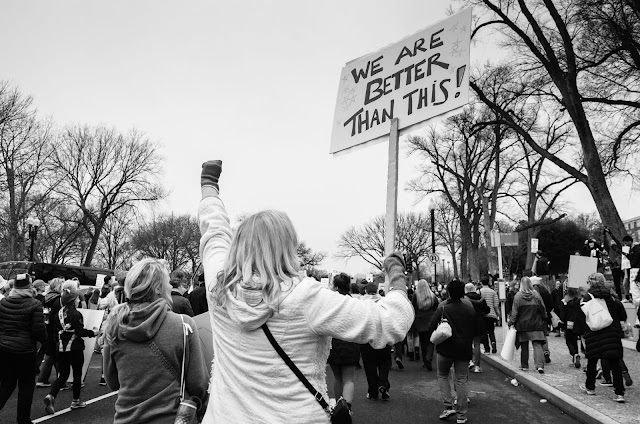 "Just vote all Republicans! Listen to Rabbi, that's what we do!"

A few were startled by the man exiting the polling center  and shouting into his phone, offering advice to the confused political soul on the other end.

That was the scene I briefly encountered as I walked toward my voting site here in Brooklyn, New York. On a very charged election day with the house and senate up for grabs during this mid-term election, and of course, the unofficial kick-off for the 2020 Presidential race (God help us all), political thoughts and stances were heightened between all human beings. And so were stigmas, stereotypes, and well, the thats-what-we-dos.

I live in a predominately Jewish neighborhood that is counterbalanced with a diverse offering of non-jewish folk. As you can expect, the poling site in my neighborhood is not only split and stratified on these election days between Jews and gentiles, but by faith, by race, and of course, by socioeconomic status. And oh yeah, by political parties.

The man who made the comment was indeed a Jewish man - middle-aged and white - socioeconomics undetermined, but I'm willing to bet he's doing pretty well.

It was a comment that stayed with me as I drove into work today. I thought about the election, the possible results, the affects it will have going forward, the absurd red and blue maps on CNN and FOX News, the continued usage of the ridiculous phrase, "still too close to call", and of course, all of the comedy that it will provide some of my favorite podcasts and late night shows.

But really, it continued to spur a growing feeling not just in my life, but how I view those around me, and in some ways, those I genuinely care for. And that feeling was complex in regards to the relationship of faith and politics, and how the dichotomy between the two has ultimately become less impactful because of the simplification of how the two have traditionally been connected.

This feeling has been spurred even more for me as of late after reading a magnificent piece in the New York Times covering how many around the country are indeed handling their faith in conjunction with their politics - especially that of evangelical Christians.

For those new to this little space of the internet called Dome Pondering - I have no political party. I find them stupid, for lack of a better phrase. At the same time, I love Jesus. Yes, he's my homeboy.

Truthfully, if I had to identify somewhere on the political spectrum, it would be moderate right.

With that said, two years into this Presidency of Donald Trump has spurred a reality of many who have come to this awakening of balancing their political thoughts with their overall faith - and of course, those who continue to tie them like a two-for-one bundle.

We all know the type - and maybe you the reader, are one of them - who vote Republican because they stand for conservative values based on the Christian faith. And quite frankly, there is a lot to agree with on that statement.

However, for me (and I can only speak for me), this Presidency doesn't represent those same values. Trump, I do not find to be a true representation of the Christian faith, and while he is touting that angle in many of his political appointments and leanings, his character is the antithesis of much of what I believe Christianity to be about. And while for some, depending on your other identifiers, are able to ignore some of those obvious flaws in acceptance of what has been comfortable - voting Republican - that same New York Times article resonated much of the flawed thinking that comes with the faith-politics bundle, especially when considering human intersectionalities.

I often think of the immigrants who trust in Jesus. Akin to the Times article, what must they be thinking? How must they feel?

And it's very similar to part of my current mindset and thoughts. Here I am, a son of immigrants, and a person of color in this country enduring oppressive systems and societal structures built for white men. How does voting Republican and the God-Red bundle fit into that for me? Especially, when that same party ignores the plight of people of color in this country, and of course, are doing horrible things to immigrants during this administration.

I constantly hear many in favor of Trump beckon the economy as the driving force for their vote, followed by pro-life issues to justify the tie to their faith. Of course, there is always the hint of same-sex marriage thrown in subtly (maybe in shame?).

But again, I find the term "Pro-Life" to be more than just abortion issues, although that is important. Pro-Life is also keeping families together, finding a way to help immigrants in refuge, and of course, yes - equality. I'll say that again - EQUALITY.

If Jesus walked among us, I strongly believe he would stand with the poor and those who didn't have a voice.


And my retort - not necessarily in sarcasm or jest, but truth - is to remind many of my Catholic friends of the damage the Catholic church has done to the many lives of young children for decades. And covered up as well. There is a responsibility there that must be picked up. And of course, there has been nothing "pro-life" in the actions done. Truth is, I still haven't received an articulate and justifiable response in how they voted Trump based on pro-life due to their Catholocism. The connection is fundamentally flawed other than - "that's what we do".

But again, it isn't meant to be a "gotcha moment". But just a mere reminder that faith and politics are much more complicated than "voting Republican". Especially, when the Republican party looks the way it does today. And quite frankly, the left side has gone just as far in the opposite direction, leaving much space for thoughts like this one to permeate and enter the political arena.

I still remember asking my parents, who have been favorably voting Democrat for as long as I can remember, why they voted left so often for people who are strong in their faith of Christianity. The answer I always received from my mother was, "If Jesus walked among us, I strongly believe he would stand with the poor and those who didn't have a voice."

The phrase, is very similar to the "God is going to have to forgive me" comment from the Times article that really lays out how many in this current space feel. It was a triggering statement for me, especially.

I'm also very sure the opposite rings true for others on voting republican, and who have done so, but have shown and expressed vulnerability and unsureness in the wholistic approach of that vote.

After all, I get it. I wish more people who did vote for Trump acknowledged those sentiments of weakness in his Presidency instead of the unconditional support to back the proverbial home team.

Because, it's complicated. It is. Anyone who claims it isn't, is lying, or has over-simplified complicated needs for a diverse country. Translation: completely blind by the privileges they are afforded in society.

And yes, if you too have struggled with these thoughts I am dishing out today, rest assured, you're not alone.

Look, politics and faith have a place together - wherever that space may be. But there is a space. In this radical new world, that perfect intersection lies elsewhere other than simply voting Republican, and it surely is much more than settling for asking for grace from the big guy above.

The Republican party has changed. And so has the Democratic party. God is unchanging (see: Malachi 3:6). It might be time for all evangelicals to look beyond what we've simplified politics to, "Just vote Republican", and begin looking for that new space for God's work - partisan boundaries removed.