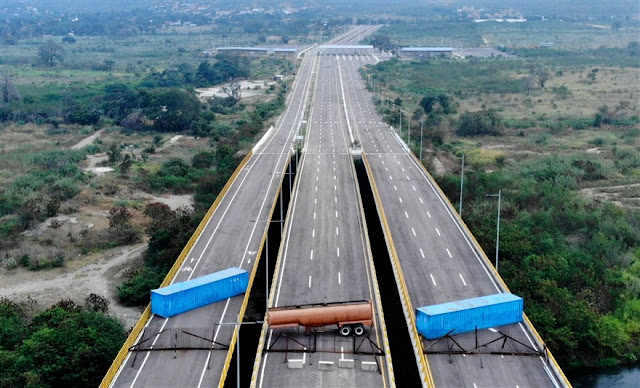 1. Eva Ramon Gallegos Cure HPV - Could Cervical Cancer be a thing of the past? It very much looks like it as after twenty years of work, Gallegos has found a cure that completely eliminates the cancer. This is remarkable work, and it's pretty awesome to see the Mexican Medical community come together proudly in this achievement.

2. "This is America" Grammy - Finally!! Childish Gambino got some national love for the work he did on this great song, and even more so, on the overall art/video that was "This is America". Of course, he wasn't there to pick it up as the Grammys and their long standing issue with the hip-hop community continues...

3. Women at SOTU - Women continue to be bad ass in the current age. Their solidarity within the Capitol for the President's SOTU was a great sight to see.

1. Venezuela Crisis - The country of Venezuela is in absolute shambles right now as they tussle over leadership, and really, a move toward democracy. Even worse, are the people of the country who are caught in the middle of all of this, suffering for help and aid, that is severely needed. Much prayers to a country and region that needs it right now. Especially when you see images like the one above, where the current President is blocking aid for the country as political leverage. SMH.

2. Australian Heat Wave - The country down-under is suffering through a crazy heat wave that has placed daily temperatures above 104 degrees, with highs that can top 120 degrees in specific areas. On top of that are the facts that this marks the third year in a row in which Australia's has increased in temperature along with reduced rainfall. Definitely some serious concern in regards to climate change presenting itself here.

3. Harper and Machado - Well, alright. We're just mere days away from camps opening in Arizona and Florida and these two don't have jobs. This has gone from intrigue, to some serious worry. Something happen already!!!!!

1. SOTU Address - Unfortunately, I didn't get to punch the keys on the SOTU address this week like I typically do. But I will say this, I give Trump credit for staying calm and delivering probably his most temperament speech yet. The rhetoric really was all the same, and at times even felt long and pointless in some areas. And there was the usual Trump off-the-cuff comments, but I thought he did OK. But as always, these settings aren't his strength. Not even close.