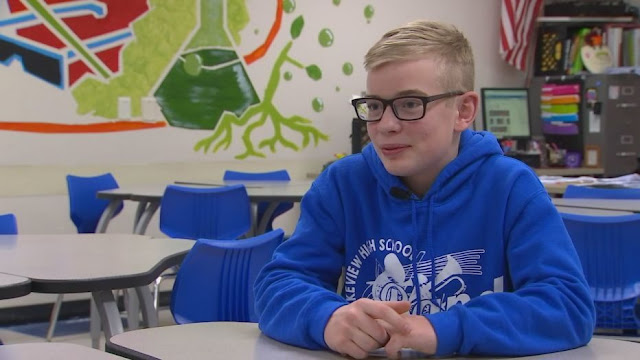 1. Colorblind Kid Gets Glasses - Twitter can often be a cruel, dark, and some times, annoying place. But if you can sift through all of the garbage, there are a few things its awesome for, and it's the positive content that often gets suppressed. Seeing this 12-year old boy try on glasses that gives him the ability to see color for the first time in his life is amazing. By the way, much love to that Principal who shared his disability - and his glasses, as well as a hug - with this kid. Great stuff.

2. Kristen Bell - I really enjoy when celebrities use their platform for the greater good. Especially when it is the kind of good that is so simple. Kristen Bell, one of the most followed celebrities on Instagram, uses her account to highlight and feature a teacher in order to get them the supplies they need. It's an awesome gesture, and one that is needed to help our educators nationwide, who we all know, are greatly underfunded.

3. Jeopardy Showdown - I loved Jeopardy growing up. I don't catch it as much as I used to, but the idea of a super challenge pitting the best contestants of all-time against each other in a series championing the first to 3 victories. This is the kind of stuff sports wishes it can host beyond fun debates. Can't wait to see this.

2. ISIS Rebuild - The turmoil in Syria has now allowed a footing for ISIS to once again grab a footing to do its evil bidding around the world once again. SMH.

3. Impeachment Updates - I have no confidence in these impeachment hearings. So much so, that I don't even bother with the news updates that come from them. But it also dawned on me how biased and how filled with "influence" news reports are that come from all of these "updates". The world of journalism really is facing a serious issue as we move forward.

1. Fox News Trademark of OK Boomer - I won't lie, I've used "OK Boomer" many times. Yes, whenever that Boomer generation individual attempts to tell you how "things ought to be". Regardless, the idea that Fox News now owns the trademark and plans to use it as a game show is the kind of thing only Fox News would do. I can only imagine the kind of dopey content that will come from this show.