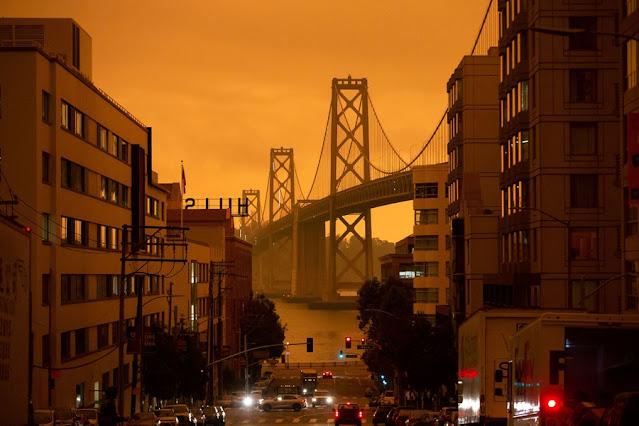 1. Firefighters - The wildfires out West have been an intriguing thing to watch unfold. The pictures of orange skies and famous scenery under ominous layovers spark so many questions about our planet, and really, just what the heck we are doing to it. Nonetheless, those who are fighting these out of control fires deserve all the praise. God bless our firefighters.

1A. Imprisoned Firefighters - And oh yeah, the ridiculous rule of using imprisoned men and women as firefighters finally received some kind of benefit - allowing them the ability to work as firefighters upon release - a measure they would have been prohibited from. Hopefully, it's a real bridge - I guess we'll see.

2. Sgt. Thomas Patrick Payne - President Trump honored Sgt. Payne with the Presidential Medal of Freedom this week, and it was definitely worth the honor - it was a great selection by the President. Payne helped save over 70 captives from execution by the evil Islamic State - just amazing. Well deserved.

3. Naomi Osaka - She's pretty awesome, right? I really am a fan of Osaka who not only is well-spoken and confident but also a bad-ass on the court. Also, she won the U.S. Open. Not too shabby.

1. West Coast Fires - So sad to see. And the truth behind the eerie photos is that so many are losing their homes and their livelihoods, with so many more still missing. Please stay safe out there.

2. President Trump "Down Play" - I touched on this a bit this week, because well, I was upset. The President knows about the Coronovirus's impact early on, and "downplaying it" (if you want to use that description) really feels like a betrayal from what should be someone protecting me.

3. NFL Social Justice? - We're at a point where social justice and sports doesn't HAVE to be a thing, but if it is, and that's what your league decides to do, then really do it. The NFL just looks like a league trying to stay afloat with public relations, make amends or appease its labor force, while also keeping the status quo for its ownership, aka the good ol' boys club. All of it is a contradiction, and it is VERY clear to see that.

1. Colorado's Weather - If what we're seeing isn't weird, how about Colorado getting dumped with 5-inches of snow, just for the next day reap an 80-degree day. 2020 is the glitch of whatever existence code there is.