But Maybe, Just Maybe, THIS Was Too Far? - Thoughts on the Chaos on Capitol Hill 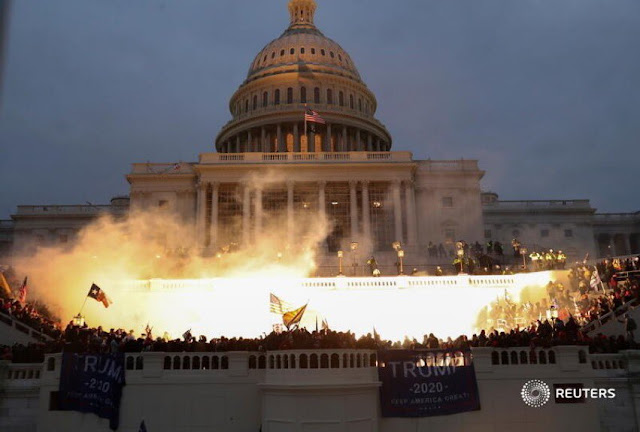 It's so easy to react to what came across our televisions yesterday. The optics are very clear throughout the analysis of the occurrence. From the incendiary acts of the President, the hypocrisy of the law enforcement present, the privilege that exists amongst that base, and the overwhelming lack of accountability and leadership that exists within our country's political consciousness and within our government spheres, it all doesn't need explaining.

It's still quite unbelievable what we witnessed, and really, I tried to absorb as much as I can from the situation before coming to a rational decision on it all. Yes, I held dialogues with others, I read thoughts on social media, I even devoted myself to only watching FOX News coverage last night to attempt to see this beyond my usual lens.

Because again, there is no "spin" in this. None. There is no way to "delegitimize" or use select information or disinformation to swing this to your desired political party's slant or to prop up your personal unverified conspiracy theory.

After it all, the only statement I could reduce what happened at the Capitol to was one that I shared on Instagram with some of my closer and personal friends and family:

The cognitive dissonance of today's 'this is not us' comforting narrative and the sudden discovery of required morality within leadership competency is stark and laughable.

Because that's what this was. It wasn't new. It wasn't sudden. It wasn't an out-of-character display.

It was the apex of cognitive dissonance, the like of which has been coming to a collision for a very long time.

For the last six years, I've watched our country continuously express through fear that the boundary of inhumanity, the threat of our democracy, and the overwhelming core of decency never was close to being breached.

Charlottesville and "very fine people on both sides" was the beginning, and wasn't too far.

Countless mass shootings - and many in our schools - was not too far.

Children being separated from parents at the border, was not too far.

The inability to denounce white supremacy on numerous occasions on a national stage...again, not too far.

Releasing tear gas on innocent protesters for a photo opportunity - not even close.

The constant baseless attacks on a democratic election, nope.

But maybe, just maybe, this was? This was it?

Some other quick thoughts:

FEAR IS THE BIGGEST DRIVER

I'll be completely honest - of course, right? This is my blog.

The deepest truth about yesterday's occurrences came from a root that still remains untold - the slow erosion of white supremacy within our country.

From what we saw at the polls in Detroit, Philadelphia, and Atlanta this past year, there are engaged people - people of color, and very much so, black people - who are motivated, mobilized, and most importantly, invested in the election process more than in any time in our history.

Voting suppression is becoming more and more difficult to pull off for those attempting to silence specific voices, more so, keeping them as disenfranchised and inactive in the process as possible.

This attempted rage and coup was, is, and remains deeper than loyalty to President Trump or a MAGA movement. This is about a base (and admittedly, many who voted this way) that can visualize their privilege and grip on a country that they believe is theirs - and theirs by some sort of right based on being white - beginning to slip away.

And Trump, along with his current demise, may just be the last great white hope (ah see what I did there?) for that way of life to exist - at least, the way in which they know it.

This base is scared. And so are many more. They'll never admit it. That was fear more than anything else.

Much of yesterday was jaw-dropping, that is again, obvious. However, nothing invoked the surrealness of what happened yesterday than this image: 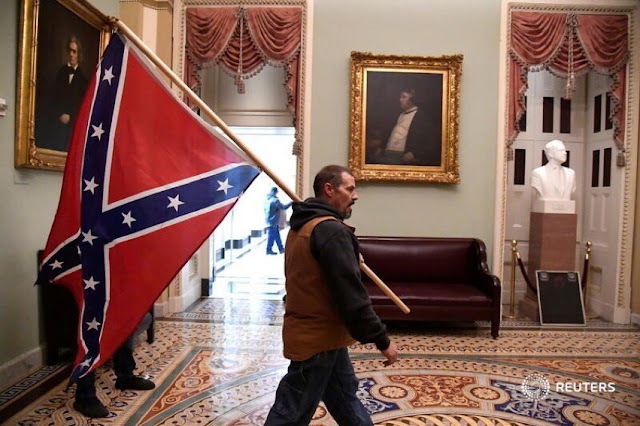 It made me feel scared. Sad. And afraid of the world I have to raise my child in.

Throughout the latter part of the day, I watched the coverage continue to unfold as a backdrop while playing with my son.

I thought about the world he would have to live in many times - will it be like this? Will it be better? Does it get worse from here?

Most importantly, how will I prepare him for this?

Much love and strength to all of you parents and guardians out there. The world needs better people.

I went to bed thinking about all of the 14,000+ individuals who were arrested over the summer. The individuals who were smashed, beaten, abducted unlawfully, and more - I thought about the trauma they still carry, and how they must feel watching a mob of white terrorists storm the Capitol and desecrate it without law enforcing resistance. And yes, how incredibly easy it was for them do so.

I also thought about the police officers who know (and maybe share?) those exact same thoughts and are unable to transfer them into action.

Because we did learn that law enforcement can and are able to practice control exhibit restraint in these environments.

And of course, it makes me wonder if white Americans are even close in their grasp of what they believe is the reality of the relationship between communities of color and law enforcement.

After all, I still have a hard time wrapping my mind around doing what most of those white men did so easily, so fearlessly in the presence of law enforcement.

As stated, the response to this (by everyone) was more important to me than the reaction. Especially that of conservatives.

Curious of whether they attempt to spin the situation, or how they too, like many in Washington are experiencing, would have to choose their MAGA fate and allegiance going forward, I was (and still am) very intrigued how this plays out.

The vibe so far seems to be that of - the left rioted in the summer, we had this, we're now even. Let's all be better.

Or...the base is not represented by the violence and actions of those on the FARRRRR right. A sudden extension of nuance-observance not exactly offered or used to breakdown Black Lives Matter protests and the bad actors within them from the summer...but I digress.

Even with that said, the accountability of President Trump's actions remains a taboo topic for many.

As stated before, I do worry about the Republican party. As an independent, our country does need conservative/moderate measures and policies, and unfortunately, the party is in shreds. For what? Donald Trump? It still makes little sense to me.

I keep reading and hearing that this isn't what the MAGA movement is about? This is not what we voted for? My continued response is this - what exactly is it?

What is the MAGA movement if it isn't, this?

That's an honest question, too. I would love to hear the response. 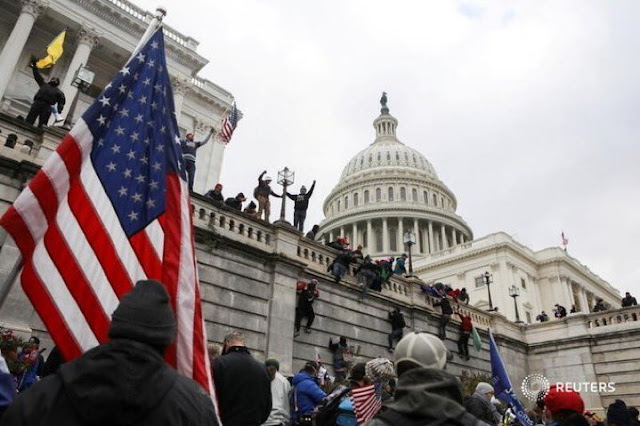 Sometimes, it takes a view from another lens to offer a thorough perspective. Here is a little bit of how the British news media carried the story:

Watch @robertmooreitv's report from inside the Capitol building as the extraordinary events unfolded in Washington DChttps://t.co/krCQf1uQbx pic.twitter.com/SiWbzF5Nzs

Just in case I haven't said it yet, the President of the United States is responsible for this. That being, Donald J. Trump.

His actions, and inactions. That's it.

It has nothing to do with policy or political alignment. He failed to uphold his oath as President and did so in an intentional and harmful manner. Let's stop finding excuses for him.

HOW DO WE BECOME GREAT, AGAIN? (FOR REAL)

I can't even remember what life was like before 2016.

As we begin 2021, we're in a pandemic, with morbid daily reminders of said pandemic, a shit economy, zero political trust in our government, even less unity, and now, an absolute embarrassment on a global scale. It's sort of ironic that this event portrayed us as the shithole country Trump attempted to stigmatize others as.

But really, not even in my wildest dreams would I be able to imagine this after he took office. And I expected the worst.

Nonetheless, my last thought is this - where do we go from here?

It was always going to be this way.